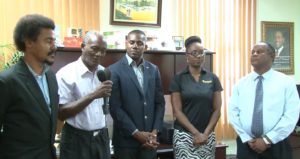 Basseterre, St. Kitts, February 07, 2017 (SKNIS): Winston “Zack” Nisbett and Janet Johnson were recently recognized at a brief, yet significant ceremony, on February 06, for the continuous contribution of their time, knowledge and resources in the development of carnival.

Chairman of the St. Kitts and Nevis Carnival Committee, Noah Mills, said that Mr. Nisbett has been a tremendous stalwart in the nurturing of culture for many years while Ms. Johnson has not only contributed as a participant, but as a coach, chaperone and consultant as it relates to pageantry and similar competitions.

“Today we are here at the minister’s office to pay homage and recognize in a small way the contributions of both individuals,” said Mr. Mills. “No doubt I can venture to say that when these individuals perform and present their responsibilities, duties and services, they are often times contractually engaged. However, the carnival committee and the minister, we both would have agreed that what we are here giving today is a token beyond that. We saw the significance; we saw the hard work.”

Deputy Prime Minister and Minister of Culture, Honourable Shawn Richards, said that what both individuals have been contributing goes beyond carnival.

“It is about the preservation; it is about sustaining and it’s about maintaining our culture here in St. Kitts and Nevis,” said Minister Richards. “It was only last week that I was at the opening ceremony for History and Heritage Month and made the point that our history and heritage can only be maintained, sustained and further developed if all of us do make that concerted effort to contribute towards it.”

The minister said that the two individuals over the years have continued to ensure that the country’s heritage continues.

“Zack, as we know him as, has often been referred to as the doctor of culture. He has gone so far as to open his own museum where persons, not only students, but any individual can go to get information about certain aspects of our culture here is St. Kitts and Nevis, especially about our folklore troupes, and for that he must be indeed commended,” said the minister. “In the case of Ms. Johnson, of course, to chaperone any contestant you have to be knowledgeable in various fields of our own culture and heritage.”

Minister Richards said that in many of the shows, the contestants would be asked to do a performing talent and in some cases design or present a costume and give a speech about some aspect of life in the federation. He said by looking at all these aspects there is much exposure of the culture of St. Kitts and Nevis. The minister added that as the culture comes to light, persons in the audience can appreciate and learn from it.

“So, while it is that the two individuals are engaged in different forms, I do believe that they have done quite a lot in terms of the history, the heritage and passing that information along to persons here in St. Kitts and Nevis,” said Minister Richards. “Carnival, as I have said to persons, can only be successful with all of the different stakeholders coming together and they all play an important role, be it the sponsors, the participants, the chaperones, the members of the carnival committee, be it the public that either comes out and supports the different shows or participates in them.”

The minister said that the Ministry of Culture, the government as a whole and the carnival committee are appreciative of their work and it is hoped that the partnerships will continue in years to come.