Historic Christiansted, on the north shore of St. Croix, stands in sharp contrast to the luxury resorts and strip malls of the rest of the island. It was home to a young Alexander Hamilton. DENNIS M. RIVERA PICHARDO FOR THE NEW YORK TIMES
Tweet

Before he achieved Revolutionary War glory, or became a founding father and an author of the Federalist Papers; before he established a sophisticated financial system, served as the nation’s first Treasury secretary or engaged in the type of petty political feud that would lead to his death in a duel at 49; before the $10 bill immortalized his beaked profile; and over two and a half centuries before a Broadway musical about his life would weave itself into the cultural spirit of the early 21st century, Alexander Hamilton was an orphan struggling to survive on the Caribbean island of St. Croix. Though he left as a teenager — and never returned — Hamilton’s tragic West Indian childhood informed his entire life, shaping his views on government, economics, slavery and much more.

Today, visitors to St. Croix, the largest of the United States Virgin Islands, are mostly in search of a tropical vacation. Residents speak of Hamilton’s West Indian roots with passing affection, as a tidbit of trivia. Visible evidence of his history with the island is minimal; the airport, which once honored him, was renamed in 1996 for the Tuskeegee airman Henry E. Rohlsen, a native son. But beyond the windswept beaches and luxurious resorts lurk the vestiges of a dark, sugar-fueled 18th-century heyday. As I discovered during a visit last summer, retracing Hamilton’s footsteps on the island illuminates both the complex and tarnished history of St. Croix and the ghosts that haunted a deeply ambitious, flawed and brilliant man.

Alexander Hamilton was born on Nevis, an island in the British West Indies about 140 miles southeast of St. Croix, in either 1755 or 1757. (Lost documents and his own subterfuge have obscured the true date, but historians generally agree on 1755.) While he was not quite “the bastard brat of a Scotch pedlar” — as John Adams once acidly described him — the circumstances surrounding his out-of-wedlock birth were certainly infelicitous. His father, James Hamilton, the dissolute fourth son of a Scottish laird, had washed up on the island of St. Kitts. He met the beautiful and spirited Rachel Faucette Lavien and the two embarked on an ill-fated romance. 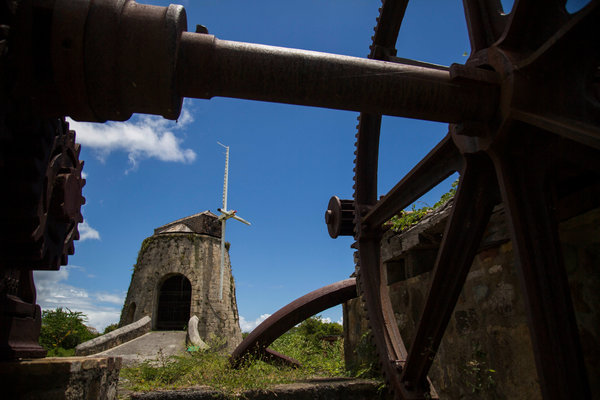 By the time she met James in her mid-20s, Rachel had experienced her share of scandal. After her French Huguenot father died in 1745, leaving her a modest inheritance, she and her British mother moved to St. Croix, then the capital of the Danish West Indies, where her married sister lived on a successful plantation called the Grange. “A handsome young woman having a snug fortune,” as Hamilton described her, Rachel soon attracted the attentions of a debauched fortune-hunting Dane named Johann Michael Lavien, at least a dozen years her senior.

With her mother “captivated by the glitter” of Lavien, the 16-year-old Rachel quickly found herself pressed into “a hated marriage” that would cast the rest of her life in misery. The union, unhappy from the start, bore a son before she left the home around 1750. A furious Lavien accused her of adultery and invoked Danish law to have her thrown into a cell at Fort Christiansvaern, the thick-wall stronghold that served as both military post and prison for the town of Christiansted.

Completed in 1749, Fort Christiansvaern is a national historic site today, an impenetrable yellow structure overlooking the glittering turquoise waters of Gallows Bay. I repressed a shiver as I wandered alone through its labyrinth of whitewashed rooms. Though primarily used as military barracks and storage, the fort also served as the colony’s prison for runaway slaves and criminals. In the west wing, I paused inside a cell to examine a small exhibition devoted to Hamilton and his family. Here in this cramped space, Rachel Lavien spent several squalid months, with only a narrow window offering paltry light and air, and a slivered view of the water.

I shook off the claustrophobia with a stroll through the sleepy, sunbaked center of historic Christiansted, on the north shore of the island. With its cobblestone streets and 18th-century Danish-style architecture, the town seemed almost forgotten by time — especially when contrasted with the strip malls and beach resorts scattered across the rest of St. Croix’s tropical landscape. 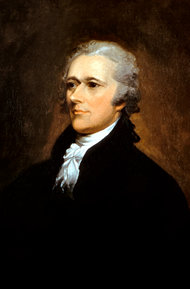 Alexander Hamilton, the first United States Treasury secretary, was deeply influenced by what he saw and lived through on St. Croix as a youth.

In 1765, abandoned by James Hamilton, Rachel moved with their two sons to 34 Company Street where the three scratched out a meager subsistence operating a small dry goods store that sold provisions like rice, flour and salted fish. Though the home has long since disappeared, replaced by the garden of a Catholic church — a structure at 23 Company Street, where the family briefly resided in 1767, is also gone — the area retains a faded colonial charm with bilingual English-Danish street signs and low buildings with pastel columns.

As I lingered on the sidewalk, a rooster’s crow pierced the heat-induced lethargy of midday and cast a melancholy air. In 1768, Rachel succumbed to a vicious fever and died here, leaving her sons essentially orphaned. Eighteen months later, their guardian cousin committed suicide. Penniless and alone, the brothers separated; James became an apprentice to a carpenter and, in an operatic twist, Alexander found himself living in the Christiansted home of a wealthy merchant’s family, and working for the import-export firm Beekman and Cruger.

“Christiansted was Hamilton’s venue,” said William Cissel, a St. Croix historian and former park ranger at Fort Christiansvaern. “It was this busy, bustling, vibrant place filled with ships of various nationalities. A great deal of what he later propounded, he absorbed from his time here.”

On stately King Street, I found the site of Beekman and Cruger’s office, where Hamilton, laboring diligently as a young clerk, absorbed the principles of international trade, credit and foreign exchange. A few blocks away, the Customs House sprawled in neoclassical grandeur, a monument to the wealth that once fueled the West Indies. A few yards beyond stretched a dainty wharf — shockingly small by modern standards — where Hamilton would have inspected cargo for his employers. They imported all of the necessities for a planter’s daily life (cider, bricks, lumber, corn and other staples), while exporting just a few products made from sugar cane — sugar, rum and molasses; that single-crop reliance may have led Hamilton to favor a diversified marketplace. 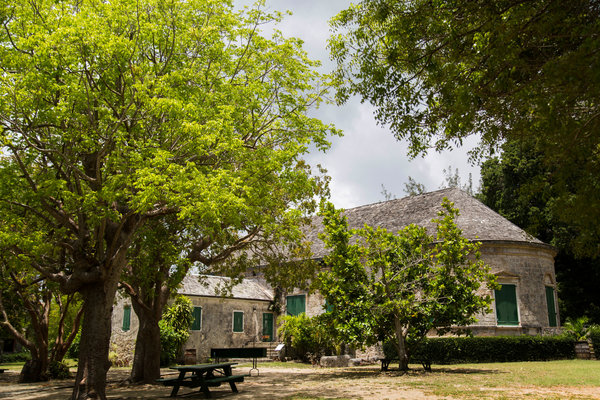 The Great House of the Estate Whim, a former sugar plantation on St. Croix. DENNIS M. RIVERA PICHARDO FOR THE NEW YORK TIMES

My stroll ended at the Danish West India and Guinea Company Warehouse, a stocky two-story building. A staircase extends into the enclosed courtyard, replacing the long platform where slaves were once auctioned. While it’s unclear if he was a regular attendee, Hamilton almost certainly witnessed some of these brutal transactions; his boyhood exposure to plantation culture left him with a lifelong antipathy toward slavery.

“These were basically killing fields for the people who worked there,” said George Tyson, another St. Croix historian. We were on the lush grounds of Estate Cane Garden — a former sugar plantation owned today by the financier Richard Jenrette — gazing at the 18th-century ruins of sugar cane mills and other farm buildings. Though it was barely midmorning, the sun beat down with a merciless heat, lending a particular inhumanity to Mr. Tyson’s descriptions of the grueling sugar-making process. “Ninety percent of the population was black slave labor,” he said. “Hamilton saw himself caught up in those social dynamics. He had no future here because of his background. Perhaps he felt some solidarity with other marginalized people.”

The luxurious interiors of the estate’s Great House, built in 1784, were a stark contrast to the blistering misery of the former cane fields. Perched on a hill overlooking the sea, cooled by the trade winds, the airy high-ceiling rooms were filled with the trappings of planter wealth, including a large collection of island mahogany furniture. Though Hamilton never set foot here, similarly showy displays would have ignited his teenage ambition. Hamilton wrote to his friend Edward Stevens in 1769 that he “would willingly risk my life, tho’ not my character, to exalt my station,” adding, “I wish there was a war.”

Fortune brought him first a hurricane. In 1772, a fierce storm devastated St. Croix. Hamilton described to his father the “prodigious glare of almost perpetual lightning, the crash of the falling houses, and the ear-piercing shrieks of the distressed”; it was a letter of such marked literary skill that it was published by the local newspaper, The Royal Danish American Gazette, where it attracted the attention of several prominent businessmen. They began a subscription fund for his education, and a few months later Hamilton was on a ship bound for Boston. 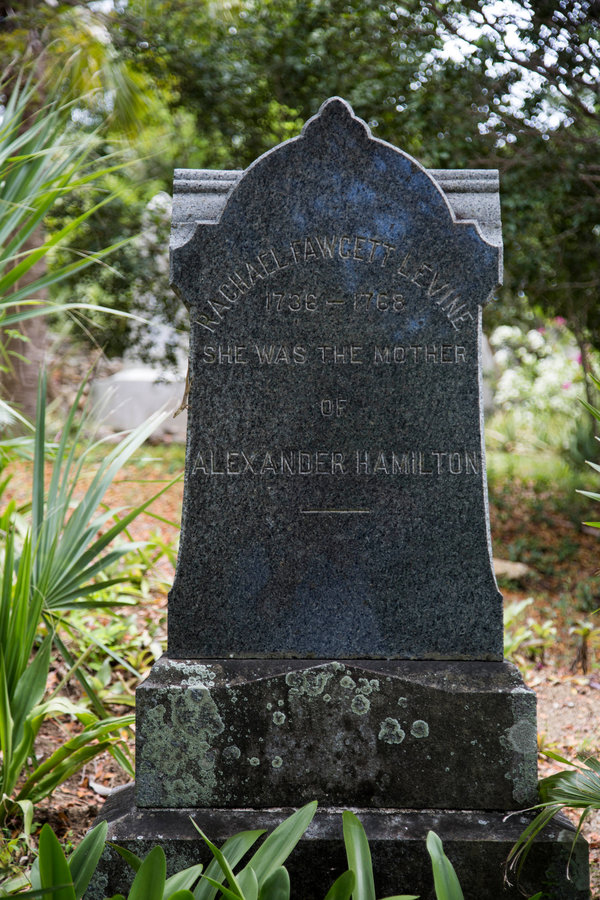 Hamilton’s mother, Rachel Lavien, is buried at a former plantation called the Grange, where her sister lived. DENNIS M. RIVERA PICHARDO FOR THE NEW YORK TIMES

“Men are generally too much attached to their native countries to leave it and dissolve all their connexions, unless they are driven to it by necessity,” Hamilton wrote in 1775. By the time he wrote these words, he was a student at King’s College in New York and an ardent supporter of the American cause, his ignominious West Indian beginnings so far behind him that they had almost become a source of shame. He had managed to escape his past — and he never looked back.

Along the waterfront, Christiansted National Historic Site is a public park encompassing seven of the town’s oldest buildings, including the Customs House, the Danish West India and Guinea Company Warehouse, and Fort Christiansvaern ($3).

Though Hamilton’s residences at Nos. 23 and 34 Company Street no longer exist, Christiansted’s historic quarter evokes his era with neo-Classical architecture and wandering wild chickens. The offices of his employer, Beekman and Cruger, stood at 7-8 King Street.

Outside of Christiansted, the Grange was the plantation of Hamilton’s aunt, where his mother was married — and buried. Today, the grounds and Great House, both changed from Hamilton’s period, are open by appointment.

Estate Whim Museum offers a glimpse of the Caribbean’s dark history through its reconstructed plantation buildings and Great House. Estate Cane Garden, another former sugar plantation, is open by appointment.