The Queen’s Baton Relay is a sporting event that involves every Commonwealth nation, where participants run or walk for some distance before handing the Baton off to another, so that it traverses the entire country before it leaves for another destination.

The mission of the event ensures that as the baton travels throughout the host country, recognition is given to important historical and 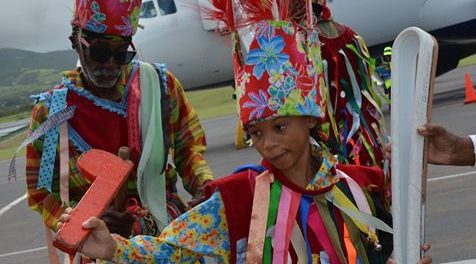 The relay will also put a specific emphasis on leaving positive legacies in the host nations, by focusing on sustainability in economic, environmental and social infrastructure.

The relay will take place on Monday for St. Kitts and Tuesday for Nevis.

As part of the Queen’s Baton Relay, the baton and visiting team will make calls on the Governor General Sir Tapley Seaton at the Government House, Prime Minister Dr. Timothy Harris and his Cabinet, civil servants, athletes, school children, members of the general public, and visit Wingfield Estate and an area of the Rain Forest now dubbed the Commonwealth Canopy by Her Majesty Queen Elizabeth II.

The Baton departs the federation on Wednesday for Anguilla.

The relay started on the 13th of March, 2017 at Buckingham Palace, and the baton will travel a total of 230,000 kilometers of land until it reaches its final destination in Australia on Christmas Eve.

During its 388 days of travel the baton will complete several firsts, including being present at the 2017 Commonwealth Youth Games in The Bahamas from 19th to the 23rd of July.

Starting on Christmas day, the baton will go on a 100-day journey throughout Australia’s domestic sector and end on the opening ceremony for the Commonwealth Games, before returning to Her Majesty The Queen to announce the official start of the games.

This year’s Queen Baton Relay will be the longest relay in history and the most accessible to date.