Prime Minister Dr. the Honourable Timothy Harris on Tuesday, January 17th, 2017, toured the newly paved main artery road leading to the Grange Nursing Home & Healthcare Facility, as well as the newly paved side roads that lead into Ottley’s Housing Extension. The paving of the roads took about a month to reach substantial [around 90%] completion, and this was achieved just in time for the holidays “as a Christmas gift to the people.”

Dr. Harris, the Parliamentary Representative for Constituency #7 (Belle Vue to Ottley’s Village), used the occasion of the tour to speak with the proprietors of the Grange, Mrs. Patricia Richards-Leader, M.B.E. and her husband Mr. Ashton Leader, as well as with their employees. The feedback from them was very positive. Family members, friends and well-wishers visiting loved ones at the Grange are also delighted at the improved road condition. 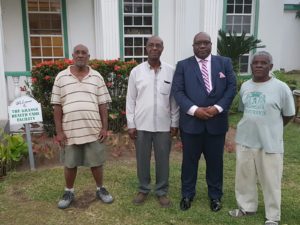 Employees are now being brought to the Grange Nursing Home & Healthcare Facility by public transport buses. Bus drivers previously had refused to do so on account of the derelict condition of the road, which is a thing of the past, thanks to Prime Minister Harris and his Team Unity administration.

The paving of this main artery road had been a campaign promise of Dr. the Honourable Timothy Harris.

Speaking at his well-attended Constituency #7 general meeting at the Violet Petty Primary School in Lodge Project on Sunday, November 13th, 2016, Prime Minister Harris said, “We want the road to the Grange before Christmas.”

The Honourable Prime Minister continued: “A lot of people are coming in for Carnival and a lot of people plan to go down there to bring greetings to loved ones. So we want the road before Christmas. It is reatherefore, is for national development and it is in the national interest, and we welcome it and we are happy for it.”

Speaking on the phone with the Press Unit in the Office of the Prime Minister on Tuesday, November 15th, 2016, Mrs. Patricia Richards-Leader, M.B.E. – upon hearing what Dr. Harris said at his constituency meeting – remarked: “Praise to God! Sixteen years I’ve been waiting. People see the towering building from the road only to meet bumps on their way here.”

Mrs. Richards-Leader added: “I just want to thank the Prime Minister. I know he is a man of his word. He has tried to get the road done over the past 16 years.”

This morning, while commenting on the progress so far [the drain at the end of the main road by the Grange, leading down to the Ottley’s ghaut, is still under construction], Prime Minister Harris said, “I am very pleased by this accomplishment. The Grange Health Facility came at great sacrifice to the proprietors, particularly Mrs. Leader who wanted to give back to her country via a high-quality service for the elderly in particular. She made the investment, but the quality of the road was a drawback to her business, as well as a terrible inconvenience to those who need to drive to and fro. She received no support from the former administration.

“I thank Minister of Public Infrastructure, the Honourable Ian ‘Patches’ Liburd for the timely response he brought to this felt need. Not only are the visitors and employees happy, but those in the adjoining residential area are proud of this accomplishment.”  While at the Grange Nursing Home & Healthcare Facility, Prime Minister Harris also interacted with the residents and their care providers.

The Grange, which was established 17 years ago, has over 30 residents who hail from St. Kitts and Nevis, as well as the Caribbean region and the United States.