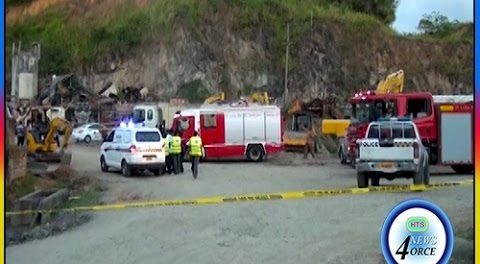 Tweet
[ngg_images source=”galleries” display_type=”photocrati-nextgen_basic_slideshow” gallery_width=”600″ gallery_height=”400″ cycle_effect=”fade” cycle_interval=”10″ show_thumbnail_link=”1″ thumbnail_link_text=”[Show thumbnails]” order_by=”sortorder” order_direction=”ASC” returns=”included” maximum_entity_count=”500″]
A major explosion  rocked the north of Saint Lucia on Tuesday afternoon.
Three people have been confirmed dead and 20 hospitalised following the explosion at a Rayneau Construction-operated quarry in Cul de Sac, Castries late Tuesday t afternoon. The dead and injured are believed to comprise mainly company employees. Many of the persons hospitalised are in serious or critical condition, officials said. Search parties are working throughout the night for the missing, officials said. Though reports suggest that about eight people are missing, a company official said they’re still trying to get an account of all workers and are unable to give a definitive figure at this time. The explosion, which occurred after 5 p.m. and was heard miles away, may have been triggered by container loaded with explosive material, including dynamite, according to sources. Initially, many persons in communities further away from the blast, mistook the explosion for an earthquake.

Prime Minister  Allen Chastanet Tuesday night expressed condolences to the families of those killed . “It is a very sad situation whenever somebody loses his life whilst working with something that’s a hazard, it’s always heart breaking when it does happen,” said Chastanet.
Tweet