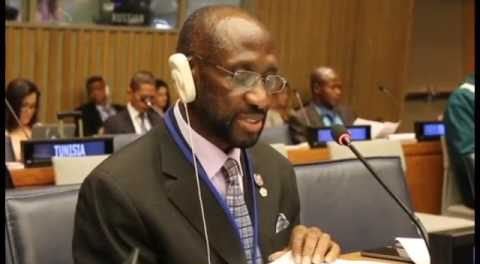 On the third day of the highly anticipated Partnership Dialogues, currently underway at the United Nations Headquarters in New York, St. Kitts and Nevis’ Ambassador to the United Nations, His Excellency Sam Condor delivered a statement on the topic, “Making Fisheries Sustainable.”

Members of CARICOM have paid close attention to the Partnership Dialogues to garner insightful information as to how Member States currently handle the multi-faceted challenges of Climate Change and its impact on our Oceans.

The Ambassador stated, “In 2011, a Strategic Plan with a clearly defined Eco-System Approach to Fisheries Management (EAFM) was implemented.  This plan allowed Government and all relevant stakeholders to chart a course, aimed at making Fisheries in the Federation of St. Kitts and Nevis truly sustainable.”

Ambassador Condor affirmed that, “Despite the numerous challenges with implementation, the focused approach to Fisheries and the citizens who depend on the ocean for their livelihood has resulted in the strengthening of the basis for implementation of the activities identified and now closely linked to the Government’s support for Climate Change mitigation measures.”Ambassador Condor contends that Small Island Developing States play an integral role in ensuring positive change in the sustainability of Fisheries. The Government of St. Kitts and Nevis understands its duty to its citizens, as well as its interconnectedness to the region and the world.  Government, along with its regional and global partners, is a key player in strengthening the economy, by ensuring that sustainable activities such as Fisheries, Tourism and Aquaculture maritime Transportation continue to thrive.

The week-long Partnership Dialogues form part of the United Nations Oceans Conference and will continue until Friday, June 9, 2017.

The following topics will complete this week’s discussions: