Is it legal to auction off an unclaimed 17th-century cannon on the Internet? Or does that make you a pirate? 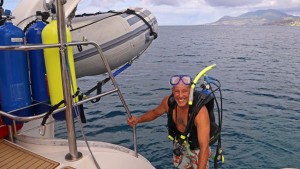 It’s the stuff daydreams are made of: hop off the back of your cruising catamaran, dive down to check the anchor, and—Hey?! Is that a half-buried wartime relic from centuries-gone naval battles for control of St. Kitts? That’s basically how it went for 64-year-old Eric Sanford on a vacation earlier in January.

Sanford, an entrepreneur and sailor from White Salmon, Washington, and his wife, Debbie, had just anchored their 43-foot-boat, Indigo, in a small bay in about 20 feet of clear water when, he says, “about 50 feet away I noticed something out of place.”

“At first I thought it was a log, so I swam over to investigate. It’s strange to see a log at the bottom of the ocean,” Sanford says. He kicked towards the log to brush the sand away and realized that what he was looking at was metal, not wood. He dove down several more times to get a good look, then swam back to his boat, scrambled aboard, and told his wife, “Uh, I think I just found a cannon from the 1600s.” 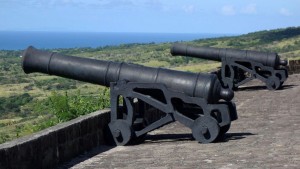 Most people in Sanford’s position would start strategizing about how to recover the sunken artifact, but Sanford had a different idea. He took a few pictures, sent an e-mail to Brimstone Hill Fortress with the GPS coordinates, and sailed away, resuming his vacation. A few days later, he published an offer on eBay: “7’ BRONZE CANNON FROM THE 1600s.”

For a price, Sanford will disclose the GPS coordinates of the cannon’s location. (At press time, the running bid was $10.50) “This is your chance to find and claim buried treasure without having to start from scratch—I found the spot, now you go and get it,” the post reads. “Could be worth millions!”

But selling rights to a piece of history might not be as cut and dry (or wet) as Sanford hopes. He’s getting emails through his eBay account from people warning him that selling the cannon is illegal and that they’ll report him to the authorities if he goes through with it. “I have to explain that I am not selling anything but the location of the cannon,” Sanford says.

According to an employee at Brimstone Hill Fortress National Park on St. Kitts, the island nation has a clear line on artifacts found within its waters: they’re government property. “My first response is that the treasure hunter and opportunist runs afoul of the laws of the land,” said a park employee who asked not to be identified. “Anything found in the coast waters really and truly is the property of the state, and must be reported to the appropriate authorities. I’m hesitant to abet piracy.

I would deem this as an act of piracy.”

Sanford insists what he’s doing is not piracy, and says that officials at Brimstone haven’t replied to his email. In fact, he’s got advice for the purchaser of the location on how to extract the hefty cannon from the sea floor: “Inner tubes. Bring ‘em down uninflated, attach ‘em to the cannon, then inflate,” Sanford says. “Bazinga! Cannon comes right up!” 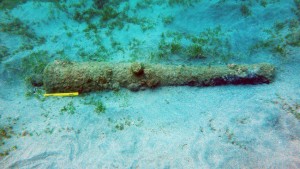 The cannon’s origins are as murky as the ethics of selling its location in an Internet auction. It strongly resembles cannons seen at Brimstone Hill Fortress, dated from the 17th century, which would make it iron, not bronze. But it could also be from a French, Spanish, or British naval ship. The countries wrestled for control of the sugar-producing island in the late 18th century. The cannon may be linked to the Battle of Frigate Bay in 1782, according to maritime archaeologist Simon Spooner. He too believes that a private citizen recovering the cannon would be illegal–and, if undertaken by amateurs, likely to damage the artifact.  “It’s absorbed salt into the ironwork,” Spooner says. “If you just remove it from the sea, that salt will crystalize, and that means the iron will start cracking.”

Sanford isn’t too concerned about the origins or the ethics. He’s already set sail for Grenada. Where he’ll wind up next, he’s unsure. “Who knows?” he says. “It’s a boat!”