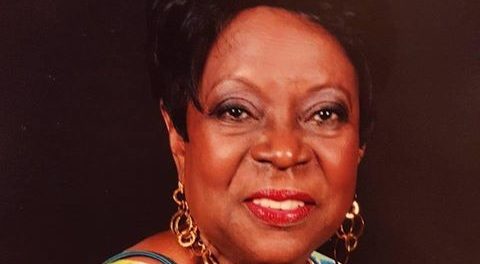 Today we mourn the loss of one of our unsung and unassuming patriots of St. Christopher, Nevis and Anguilla. I am deeply saddened by the passing of Mrs. Helen Marcella Byron-Baker.

I have known Marcella/Marcella Byron as she was more commonly called for my entire life.

Just as I recently posited about the Sebastian family, the Byron family too could be likened to an Institution.

Marcella was also an offspring of another well-known family; the O’Loughlins.’

The O’Loughlin family owned the famous 2 in 1 store on the corner of Central and Fort Streets.

When I was growing up, that was a landmark building in Basseterre.

The O’Loughlin family and my family belong to the Moravian Church. Marcella’s Aunt Lady Arrindelle, was at one time the organist and my aunt was a member of the choir.

The paternal side of Marcella’s family – The Byrons – are Methodist. Members of the Byron family are both Ordained and Local Preachers while one of Marcella’s younger brothers, Terry is one of the Church Organists.

The Byron family has also been an integral part of the Legal Fraternity in St. Kitts-Nevis.

My early understanding of the Rule of Law and the Supremacy of the Constitution in the Westminster System that we inherited from the British, I gleaned from Marcella’s older brother, Sir Dennis Byron, President of the Caribbean Court of Justice (CCJ).

I was a client of Sir Dennis when his office was located on Liverpool Row in the premises presently occupied by the Ministry of National Security.

My interaction with him allowed me to develop a keen sense of justice and fairness, that is the underpinning of the Social Relationships of our Society.

My relationship with Marcella’s youngest brother, the Honorable Vincent Byron, Jr. Attorney General of St. Kitts and Nevis, was on the field of play.

Marcella’s Journey at Home and Abroad

As a youngster growing up in the McKnight area, I spent most of my time playing sports on Greenlands Park, next to the Byron’s Residence. I was therefore in a position to observe Marcella at home.  At all times, she was pleasant, respectful and courteous to everyone.

Marcella attended what was then the Premier Secondary School for girls in St. Kitts, Nevis and Anguilla; the former Girls High School.

In 2015, Marcella joined many of her friends and colleagues of the former Girls’ High School in a Stirring Celebration of the Founding of the School. A host of former students assembled at the Wesley Methodist Church in Basseterre, St. Kitts to Commemorate the 85th Anniversary of the School. Marcella was a proud member of that School and promoted the values of her Alma Mater all her life.

I also knew Marcella while she was employed at what was then the Premier Financial Institution in St. Kitts; Barclays Bank International, now the First Caribbean International Bank, Ltd.

I did not do any business with that bank during the time Marcella was employed there, but from all reports, she served the Institution and the customers well.

Marcella migrated to North America in the mid-seventies and made New York her home but her heart was always with the people of the Federation of St. Kitts and Nevis.

Marcella was a Founding Member and President of the Kittitian American Benevolent Association (KABA). She successfully brought thousands of Nationals together through various initiatives and events she coordinated, including the Annual Independence Church Service. I have had the opportunity to participate in many of the Patriotic Celebrations of our Federation’s Independence organized by KABA.

She conducted herself in a dignified manner, and at all times exuded class, charm, confidence and grace. Marcella was a model of pride in self and Country. She was widely admired and highly respected for her Visionary Leadership.

Mrs. Helen Marcella Byron-Baker was a former Senior Property Manager at Durst Fetner, one of the largest Property Developers in New York. Her success in her chosen career path helped greatly to advance her work in the Kittitian and Nevisian Community in the Diaspora.

Marcella spearheaded many Projects that helped young people attain success and she contributed to the advancement of Nationals in St. Kitts and Nevis, as well as the Diaspora.

In 1996, the Caribbean-American Chamber of Commerce and Industry in New York Recognized and Celebrated Marcella for her stellar contributions to Community Development during the Organization’s Celebration of Women’s History Month.

Marcella was the consummate professional who conducted business in a firm, frank but fair manner.

It was for me an honor, a pleasure and privilege to have known her and to have worked with her.  Her selflessness, devotion and commitment to the noble cause of the advancement of humanity will always be remembered and her invaluable contributions will never be forgotten.

Marcella has left an enduring legacy and we are better as a people because of her life and her work.  We honor her memory.

May her soul and the souls of all the faithful departed rest in eternal peace and rise in glory.