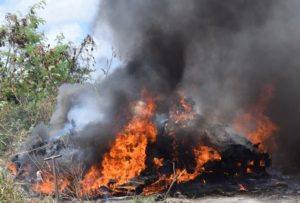 The operation included Officers from the Special Services Unit (SSU), the Tabernacle Police Station, District ‘B’ Patrol, the Anti-Gang Unit and Soldiers from the St. Kitts-Nevis Defence Force (SKNDF). In total, over 20,000 marijuana plants were uprooted in several plots in the Mansion and Estridge Mountain area. The plants were uprooted on May 27 and 28 and destroyed on May 31. They ranged from seedling to 11 feet in height. The mature and mid-sized plants have a combined estimated street value of EC$2.5 million. Allowed to mature, the seedlings would have had an estimated street value of $1 million.

Assistant Commissioner of Police (ACP) with responsibility for the Operations Directorate, Terrance James, explained that many of the former sugar lands were being used for marijuana cultivation. As a result, the Police embarked on an eradication operation which has been going on for a period of time.

“This operation will continue. On our law books, the use, cultivation and distribution of marijuana is still illegal. It has not been decriminalised or legalised. So I would like to discourage persons from cultivating it, and encourage them to plant crops for food,” implored ACP James.

ACP James assured that such operations would continue. Similar exercises earlier in May resulted in close to 3,000 plants being uprooted in Stapleton and Brotherson. The evidence has shown that there is a direct correlation between the trafficking and cultivation of drugs and violent crimes.