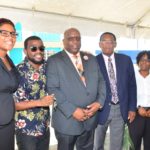 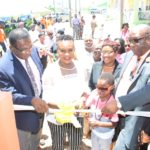 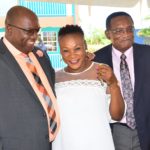 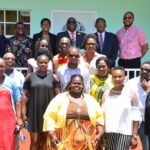 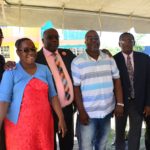 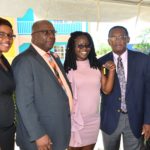 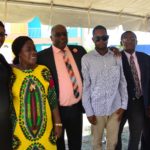 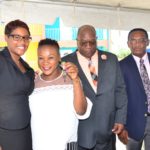 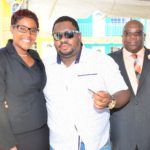 BASSETERRE, St. Kitts, August 23, 2018 (Press Unit in the Office of the Prime Minister) – The Government of St. Kitts and Nevis continues to roll out its landmark housing scheme at an unprecedented rate, as another twelve families were presented with keys to their brand new homes. The houses are being delivered under the umbrella of the Unity Housing Solutions Programme, which is administered by the National Housing Corporation (NHC).

NHC hosted its second key presentation ceremony for the week today, Thursday, August 23, where the keys to twelve homes within a recently constructed townhouse at La Guerite, West Basseterre were distributed. 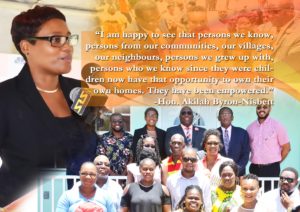 Senator the Honourable Akilah Byron Nisbett, who is the People’s Labour Party’s caretaker for Constituency Three, was among those present at Thursday’s ceremony. The honourable senator said it is comforting to see persons from within her constituency being elevated to the status of homeowners.

She added, “I am happy to see that persons we know, persons from our communities, our villages, our neighbours, persons we grew up with, persons who we know since they were children now have that opportunity to own their own homes. They have been empowered.”

Delivering the featured address, Prime Minister Dr. the Honourable Timothy Harris said his government was careful to make sure that all constituencies benefit from the policies and programmes of his administration, adding, “We are talking about assistance provided to the people of West Basseterre not just in housing but in sports, in healthcare development, in every area in which the government is engaged, West Basseterre—like the people in [Constituency] number six—will feel the weight and the support of the Team Unity Administration.”

Senator Byron noted that this mantra of empowering citizens and residents has become synonymous with policies and programmes of the three year old Team Unity Administration.

“If you look at the work of this government over the past three years, there is one theme that stands out and that is ‘empowerment’,” the senator said. “This government has and continues to empower individuals so that they can achieve much more [with] the main goal being to raise the standard of living for every citizen of both St. Kitts and Nevis.”

“Within the three years of this government we have already seen many persons not only empowered through homeownership but we also see persons empowered by getting loans [under the Fresh Start programme] that allow them to become entrepreneurs,” Senator Byron added, while referencing the success story of Mr. Chad Depusoir and Mr. Ike Dias who were able to start their steel bending business venture as a result of the Fresh Start programme.

Information from the National Housing Corporation suggest that an additional eight houses on individual lots throughout various communities in Constituency Three are nearing completion, and a contract is expected to be signed shortly for the construction of a second townhouse in the constituency.
Tweet