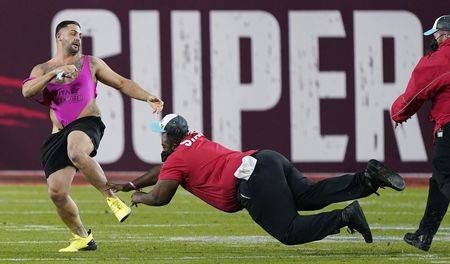 Yuri Andrade — the man who broke onto the field while wearing a pink thong bathing suit — says he came up with the idea for the stunt after seeing a prop bet that offered GREAT ODDS if someone actually ran onto the field during the SB55.Andrade explained the whole thing during an interview with WILD 94.1 — saying the gambling website Bovada offered +750 odds ($100 bet pays $750) so he decided to take matters into his own hands.He called up everyone he knew and had them BET on someone storming the field — then he got tickets to the game and recruited a buddy to serve as a decoy.Andrade says once security was distracted by his pal — he ran onto the field … and the rest is history.The 31-year-old says he also sent someone to Vegas to make the prop bet at a sportsbook there — but he didn’t identify which book took the action.Bottom line … Andrade says he walked away with $375,000 in profit!!Of course, he was arrested and booked for trespassing — but chalks the whole thing up as no big deal.The worst part was he couldn’t pick the wedgie that was up his ass while in custody because he was in handcuffs … but he’s clearly over that now.