Fashion Avenue News is excited to have Wendy “Boss Lady” Isaac grace their April 2017 cover.  The St.Kitts beauty will release her first fragrance entitled, BOSS LADY.  She is also producing Le Coiffeur Styles the Runway this month. Tickets are selling out quickly, get yours today.   You can purchase the April issue at the Magazine Cafe, 15 West 37th Street or PayPal $30.00 to NewsDesk@BTETV.com.   Read more about the Boss Lady….. 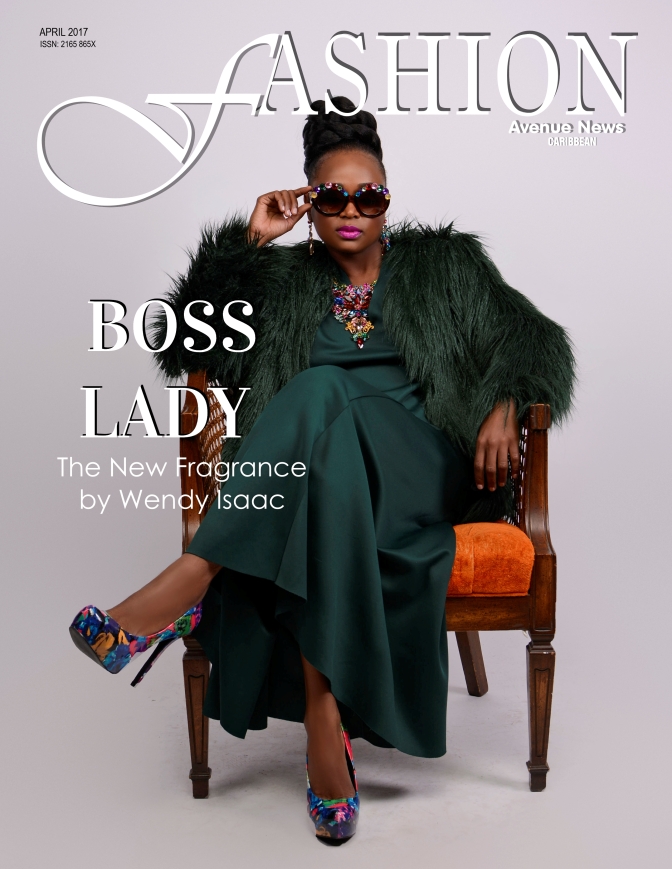 This month, Saturday April 15, 2017, “The Boss Lady”, Wendy Isaac will release her new fresh fragrance, affectionately entitled “BOSS LADY”, during her Le Coiffeur Styles the runway show held at the Watson Hotel (formerly the Holiday Inn 440 West 57th Street).  The notes in the fragrance include an elegant mix of musk’s in the top, a sensual balsamic vanilla accord in the heart and sweet modern caramel in the base.  The Boss Lady, as Editor-in-Chief, Sofia Davis named her, has a long history in fashion, styling and training runway models, along with producing fabulous Fashion & Yacht events.

Here is a little bit more about The Boss Lady:

As a Fashion Stylist she interprets the styling requirements of clients to produce both an impressively creative and technically accurate visual representation. Five feet eight inches’ tall beauty, Wendy Isaac, luckily has been on both sides of the fence, being not only a model but also a certified fashion stylist consultant.  Hailing from the picturesque Molineux, St. Kitts, and her journey proved that simply having a dream and pursuing it are the first steps of establishing your very own success story. Wendy, an elegant fashionista has always aspired to be a major part of the fashion industry or as she described it had “A passion for fashion”. For someone who spent their Saturday’s at the age of eight being inspired by the Elsa Clinch Style Segment on CNN and designing dresses by her early teen years anyone would agree that Wendy’s future in Fashion and style was inevitable, the first chapter to the story of the rest of her life. At age fifteen it should come as no surprise that Wendy was already winning grand competitions such as Miss Convent High school in her birth country around the age of fifteen while attending St. Theresa Convent High. Subsequently, she won Miss Talented teen and continued making headlines as she was awarded another major win being crowned Miss Caribbean talented teen, one of the most premiered Caribbean pageants all within a three-year time frame. Undeniably, she was made for the industry and her first magazine spread in Panache; Posh and Miami Teen magazine at only age 18 was solid proof that she was a force to be reckoned with. After accomplishing so much so young, Wendy being the ambitious and diligent person she was and remains, was fueled to tackle all her goals against all odds. She then managed to be booked by Classique Model Agency for two years and ventured on her own doing independent modeling and landing gigs in some of the most prominent International Shows in different Caribbean countries as well as New York City and Miami, where she continued to showcase her talent and make her name known. A Stylist’s client may agree that the background of their stylist is important to keep customer confidence; hence the reason a spot-on slideshow of Wendy’s journey is clear enough clarification for her extensive clientele. Wendy, continued to impress the fashion elite and caught the attention of Editor-in-Chief, Sofia Davis of Fashion Avenue News.  While attending one of Wendy’s fashion events, Sofia realized this lady is TALENTED and offered Wendy the position of Editor-in-Chief of Fashion Avenue News Caribbean.  In this position Wendy has expanded her brand as well as helped get additional models noticed by placing them on editorials and covers.

We are presently taking interview appointments for the April 15, launch of her fragrance and fashion event.  If you would like to make an appointment, kindly email us at SDavis@FashionAvenueNews.com

Media and Press can also register at SDavis@FashionAvenueNews.com – we look forward to having you cover the event.