The five-star luxury beach resort located at Christophe Harbour has seen strong bookings since its opening, and the additional job vacancies announced this month indicate that it is enjoying a successful debut as the first Park Hyatt hotel in the Caribbean.

When the much-buzzed-about hotel hosted a press conference in mid-November, Mohammed Asaria, vice chairman of Range Developments, the developer of the project, said during his introduction, “Ladies and gentlemen, it’s happened,” referring to the opening of the hotel.

“Guests have been coming in since then, and we have very strong bookings over the festive period,” Mr. Asaria added, while noting, “I will assure you this now, the benefits of this hotel are already being felt throughout the whole economy of St. Kitts and Nevis.  That’s just not on the 20 acres [of the hotel] or the [2,500 acres of the] southeast peninsula.  That benefit is being felt from Charlestown to Basseterre, from Newcastle to St. Peter’s.” 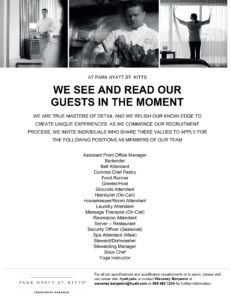 Addressing Prime Minister Dr. the Honourable Timothy Harris and Minister of Tourism the Honourable Lindsay Grant, who both sat at the head table during the press conference, Mr. Asaria also said, “We’re here to work hand in hand with your Government and the people of St. Kitts and Nevis to ensure that that opportunity is maximized, and I believe a lot of local vendors and supply chains have seen Mr. Flor [van der Vaart, the general manager of the hotel] and his team interact with them, and we will do everything in our power to ensure that the economic impact of this is far and wide.”

If you are interested in working at Park Hyatt St. Kitts, please contact Human Resources Manager Waveney Benjamin atwaveney.benjamin@hyatt.com or 869.468.1234.  Close to 20 positions are now being advertised.

Park Hyatt St. Kitts recently scored a mention on The New York Times’ highly prestigious annual 52 Places to Go issue.  The special issue in the newspaper’s Travel section ranks the Caribbean as an entity as #4.

What’s more, St. Kitts is one of 22 destinations that Bloomberg Businessweek says will be “especially hot” this year.  Mentioned second, St. Kitts is the only Caribbean destination on the list titled Where to Go in 2018.

Follow the Press Secretary to the Prime Minister of St. Kitts and Nevis on social media.