It’s a new era at Vogue with diversity on the covers, soaring sales and the first female publishing director in the magazine’s history. Vanessa Kingori talks about spearheading a revolution

Vanessa Kingori “never thought” she could be the publisher of Vogue, “although I’m embarrassed to say that now.” A black immigrant born in Kenya, raised in St Kitts, “I’d never seen someone who looked like me running the commercial side.” Not only that, in the magazine’s 102-year history no previous publisher has been female.

It was Edward Enninful, Vogue’s new and first male editor, who drew her attention to this. “He said, ‘Congratulations you’re the first ever woman to do this’. I thought, ‘I can’t be’.”

At the time Kingori was publisher at GQ. As a mark of how little changed at Condé Nast (the parent company), the newest staff member in her office had been there seven years. Then: revolution. Vogue’s editor Alexandra Shulman retired after 25 years, Stephen Quinn, the publisher, after 26, and Nicholas Coleridge, the president of CondéNast, after 28 years. Following them out of the revolving doors of Vogue House in Hanover Square were deputies, directors, section editors, assistants and multiple bag-carriers. One can only imagine them, gloved and in sunglasses, leaving a trail of coloured feathers. 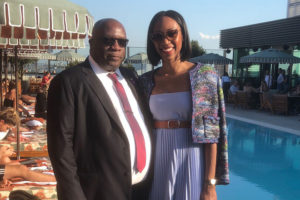 For the past 10 months, Enninful and his new team have been building from scratch. A new-era Vogue to respond to shrinking magazine sales, dwindling advertising revenue and an explosion in online and social media. “Good luck!” might have been the departing cry from their predecessors.

Until now, both Enninful and Kingori been quiet. Kingori says they wanted the figures to speak before they did.

Today she allows herself a short smile while stressing they are “only at the beginning. We have a lot more to do.”

We meet in Vogue House boardroom, deco windows flung open to let in the sultry air. She’s 5ft 11in without heels, so probably six foot today in her Christian Louboutins. She’s towering, “a machine”, she jokes, who needs the power of food. Later she tells me how, as a young model appearing in a Vivienne Westwood retrospective at the V&A, she skipped lunch in sheer excitement at appearing in front of people like Mick Jagger and Jerry Hall, got halfway down the runway in her corset and fainted. “When I came round Mick Hucknall was standing over me.”

Among her coups at the company so far are persuading a number of megabrands to return — including Nike — as well as bringing in first-timers such as super cool Palace Skate and a sponsorship with Pinterest.

Amazing though it may sound, Louboutin had never advertised in Vogue (or anywhere) so Kingori persuaded him to do a project around his “nudes” — he has a range for 30 skin tones — to chime with Vogue’s drive for inclusion.

Although she wears it lightly, Kingori sees her role as political. She describes herself as “a child of the Windrush” (her mother came to the UK from St Kitts as a nurse aged 17, met her Kenyan father in London, and returned to London when Kingori and her sister were seven and nine).

And one thing was always clear: new era Vogue was about diversity and “new frontiers”. Enninful’s first cover featured Adwoa Aboah, a mixed-race London model, and the current cover features Halima Aden, the first hijab-wearing model to be used on a cover, as well as nine others from different ethnic backgrounds.

Other magazines have followed, but Kingori is wary. “We see this amazing trend to have more diverse faces on covers — and the power of the image is important — but it is only stage one.”

Kingori believes in “true change”: “True change from within that is reflected out.” So, she asks, what’s going on behind the scenes? Are these workplaces diverse? “Could we look at what the narrative is — who is writing the narrative? So it’s not just about the perception of diversity.”

She is quick to point out that “diversity is not just about race. It’s about diversity of perspective, which is also about class.” (This was briefly a raw nerve: in the post-Shulman exodus, there were unattributed quotes saying the new regime was wiping out posh girls).

But it’s also about age. February’s cover with Nicole Kidman was described by one paper as “disappointing.” Kingori doesn’t hide her annoyance. “People said, ‘why is there a white woman on the cover when [Enninful] said there’d be lots of diversity?’ We thought, ‘There is! Nicole Kidman is 50!’ It’s not often that you see a woman of 50 as a cover star.”

Equally, she says, there were those who criticised Enninful’s appointment of Venetia Scott as fashion director. “They said, ‘Oh my God, isn’t she old?’ They thought we’d only have kids from Hoxton with blue hair.”

Scott is “amazing, because she has so many experiences to draw on, anything that’s thrown at her she’ll know what to do. Younger stars might be drawing on newer experiences and trends that you and I don’t know about. But the combination is stronger than one or the other. Edward said, ‘This is diversity’.”

This is what she loves about him. “He doesn’t mind sticking his neck out, saying, ‘Not everyone will get it but for those who do, it’s going to mean a lot’.”

They are friends. Now they work together, travel together, spend hours on the phone. Enninful is “hilarious”. There is an “Edward fan” in reception every day and last week an entire trolley of flowers arrived as an expression of thanks from a fan who finds new Vogue “makes me feel better about myself”.

When I ask about reports of his emotional outbursts — he is said to have cried because he was stuck in Milan when Anna Wintour arrived at London Fashion Week with the Queen — she looks sceptical: “I’ve never seen him cry.”

But he is “instinctive”, she says, with a clear vision: “He’s someone who says, ‘I know that is going to work’. This may come across as emotional. But nine times out of 10 when he’s taken those decisions and some of us might have thought, ‘I don’t get that’, he’s been right.”

One model he has featured heavily is Naomi Campbell. In some respects he has reinvented her. While still hugely successful, Campbell had a sketchy reputation — not least because of a string of assaults against various assistants, housekeepers and airline staff. She was also notoriously late — sometimes days late — for shoots.

Enninful decided his passionate, opinionated friend should do interviews for Vogue. He dispatched Campbell to see Sadiq Khan. Kingori says the Mayor’s office cautiously enquired whether they’d need to schedule “extra time”.Kingori knows Sadiq: she sits on his Brexit advisory panel and is a huge fan. “If I am being honest,” she says, “I thought, ‘Are they going to have anything in common?’”

Not only was Campbell on time, the interview was well received. Shortly afterwards, she interviewed Apple’s designer Sir Jony Ive. More are in the pipeline. The idea of working for Vogue is something “Naomi takes seriously”. Does she arrive on time? “She’s early.” Seriously? “They were all stunned.”

In preparation for a film and fashion party earlier in the year, Campbell accompanied Kingori on recces of venues, had conversations about lighting and guest lists. “Everyone in the office was terrified. One assistant sent this lovely note to say: ‘Never in my wildest dreams did I think that I would be in an office with the lady publisher of Vogue, the male editor of Vogue and Naomi Campbell.’

Inevitably, conversation turns to Meghan Markle, “another symbol of change and progress”, and then to Kingori’s sister Patricia, an academic working at Oxford University who has mixed-race children. Kingori volunteers that she is sometimes confused for their nanny. “Her son is fair and people are constantly saying to her ‘Oh you’ve got a great job with him. He’s so lovely’.”

Worse, Patricia was held at a British airport because the border police “would not believe she was her child’s mother. They took her into a room and were asking her son questions like, ‘Do you know this woman?’ And he was so confused, and quite pressured and scared and he started floundering, so they held them for quite a long time. Luckily her husband is a barrister so it was pretty quickly sorted out.”

She was the only black girl in her class at an all-girls convent in Twickenham. “But it didn’t bother me. I owe my parents a lot. I wasn’t afraid of change.”

Far more than any racism, she remembers that the headmistress, Sister Brenda, would make them kneel if she passed them in the corridor, “and if your skirt didn’t touch the floor when you did you’d be in detention”.

Her mother hated her modelling — “She wanted me to be a doctor or a lawyer” — but she enjoyed working for Vivienne Westwood who told the girls “have your own thoughts!”, encouraging them to tell her what they really thought of her clothes. “She’d say, ‘Do you hate this? Even I don’t think I like it’.”

After university, Kingori worked briefly for Matches and then the Evening Standard where her boss told her, “One day you’re going to be the publisher of Vogue.” She says she isn’t entirely sure what that meant at the time, “but I saw him the other day and he said, ‘Do you remember?’ And I said, ‘I do, I do’.