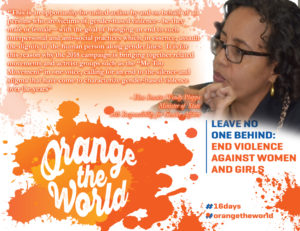 The theme “Orange the World: #HearMeToo” has been selected by UN Women for the 2018 observance of the 16 Days of Activism Against Gender-based Violence Campaign – better known as the 16 Day Campaign – which is meant to raise awareness to gender-based violence, prevent it wherever possible, and advocate for relief and justice for victims of such criminal activity.

Minister of State with Responsibility for Gender Affairs, the Hon Senator Wendy Phipps, indicated that the 16 Day Campaign is being observed in the Federation from November 25th to December 10th, under the leadership of the Departments of Gender Affairs on both islands.  The Minister provided some background to this special awareness campaign:

“The 16 Day Campaign is held between two major United Nations’ observances.  These are November 25th, the International Day for the Elimination of Violence Against Women, and December 10th, which is Human Rights Day.  The campaign was a product of the first Women’s Global Leadership Institute that was held in 1991, and organised by the Rutgers University-based Center for Women’s Global Leadership,” Minister Phipps stated.

Minister Phipps added that the annual observance of the 16 Day Campaign in meant to demonstrate solidarity with survivors of domestic and gender-based violence, their families, support agencies and governmental bodies. She said:

“This is an opportunity for united action by and on behalf of all persons who are victims of gender-based violence – be they male or female – with the goal of bringing an end to such interpersonal and anti-social practices which, in essence, assault the dignity of the human person along gender lines,” the Minister stated.  “It is for this reason why the 2018 campaign is bringing together related movements and activist groups such as the “Me Too Movement” in one voice, calling for an end to the silence and stigma that have come to characterize gender-based violence over the years,” the Minister said.

The Department of Gender Affairs on St. Kitts has planned a number of programmes to observe the 16 Day Campaign, with the support of several agencies and special interest groups, such as UNESCO.  Some of these activities are:

Nov. 30th         –           Flash Mob by the drama clubs of Washington Archibald and Basseterre
High Schools, depicting acts of domestic violence that are common in our Nation.  Three areas around Basseterre will be selected for the staging of the flash mobs.

December 6th   –           Workshop in collaboration with Spotlight Inc., a newly formed, local non-
governmental organisation (NGO) that serves the youth community.  The workshop is meant to educate the public on gender-based violence.

The Department of Gender Affairs wishes to remind the public that gender-based violence is not purely a case of women and girls being the only victims.  Such violence has both female and male victims, although males are far less likely to (a) be abused; and (b) report cases of such crimes.

The Department of Gender Affairs encourages the general public to support the various programmes which are being organised in observance of the 2018 16 Day Campaign, with a view to getting involved in the worthwhile, global mission of ending gender-based violence wherever it exists, starting with our own Country of St. Kitts and Nevis.