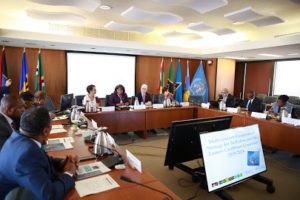 The new strategy is the second agreement of its kind between PAHO and this group of countries. It focuses on achieving previously unmet goals while also addressing new challenges the countries face, including health sector reform required to respond to the needs of aging populations, the growing burden of noncommunicable diseases, and the health effects of climate change, among others.

The 2018-2024 Multi-country Cooperation Strategy for Barbados and Eastern Caribbean Countries is based on five strategic priorities: strengthening the countries’ health systems to advance universal health coverage and access; reducing deaths and illness from communicable diseases like HIV, tuberculosis and hepatitis B; achieving optimum family health throughout the life course; reducing the burden of noncommunicable diseases (NCDs); and strengthening preparedness and response to health emergencies and disasters while also reducing environmental threats and risks.

During the signing event, Dr. Godfrey Xuereb, PAHO/WHO Representative for Barbados and the Eastern Caribbean countries, noted that the strategy was developed through a consultative process involving all the countries and representatives from the public and private health sector, other government ministries, nongovernmental organizations, civil society and key development partners.

Present to sign the agreement at PAHO headquarters in Washington, D.C., were: Minister of Health and Environment of Dominica Kenneth Darroux; Minister for Health and Wellness of Saint Lucia Mary Isaac; Chief Medical Officer of Antigua and Barbuda Rhonda Sealey-Thomas; Chief Medical Officer of Grenada George Mitchell; Ambassador to the US and the Organization of American States (OAS) of Barbados Seldon Charles Hart; Ambassador to the US of St. Kitts and Nevis Thelma Phillip-Browne; and Alternate Representative to the US and the OAS of Saint Vincent and the Grenadines Gareth Bynoe. Also attending the signing event was the Director General of the Organisation of Eastern Caribbean States Secretariat Didacus Jules; and Ana Treasure, Head of PAHO’s Country and Subregional Coordination.