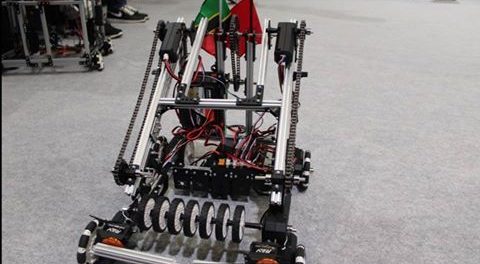 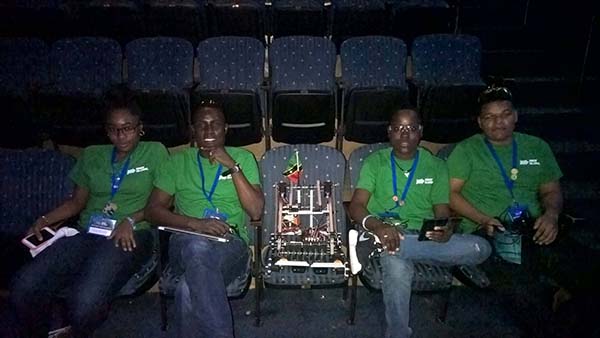 Washington, D.C. –  In its first-ever appearance at the FIRST Global Robotics Competition, a group of three students from the federation, accompanied by Dr. Ricardo Neil, placed 36th out of 163 nations in a three-day competition from July 14-17. Jermelia Henry, Zhavier Shaw and Jervik Lapsley represented the nation with flying colors at the Robotics Olympics. Competitors aged 17 or 18 were tasked to design and create a robot that could separate different colored balls that simulated clean and contaminated water, as well as pull itself up off the ground and drive on an incline.

But the team barely made the competition, as Neil found out only in March that it was occurring. The students were quickly assembled and willing to work until 2 or 3 in the morning to make this journey a reality.

At the end of the first day of competing, SKN Robotics had risen has high as fifth place, which served as an extraordinary boost to the team’s confidence.

“For us to go up against Russia, Ukraine, North Korea, South Korea and the United States, and actually beat them, says a lot,” Neil said. “Some of these countries had robotics programs going on for years, but our students were able to outwit them with the ways they drove them. We were able to maneuver all over more quickly than the other nations.”

SKN’s team designed a robot that was smaller than what some other competitors had to offer, which made the group nervous when they first examined other robots. This turned out to be an advantage, as the decreased size, as well as two different types of wheels that worked together to increase the robot’s speed and turning ability, gave them excellent scores. The students worked tirelessly and took their time to ensure they had developed the right robot.

“There were several prototypes before,” Neil said. “They had to design and redesign endlessly until they got one that was flexible, workable and could maneuver in the pit. We were able to design a robot that had an arm that hooks an area and actually pulls itself up, so we were able to achieve something that not many other countries could do.”

The robot’s ability to lift itself up separated SKN’s team from the competition immediately, as they were able to gain five more possible points than most other nations, whose robots couldn’t lift themselves fully off the ground and instead focused on driving at an incline. The team’s ability to hit the ground running and establish SKN’s robotics program on a world stage left an impact on competitors.

“We have got the respect from a lot of countries who may have not heard about St. Kitts and Nevis,” Neil said. “Now they want to visit. We had people coming to us asking about our country. You had that kind of build up, people did not expect us to rise so high. When the competition started, most people overlooked us, but when they realized we were outperforming some of the more developed countries in terms of resources, then we began to garner a lot of respect.”

After a day of alliance competition, where the SKN robotics team grouped up with Slovenia and Zimbabwe, and another day of solo competition, SKN finished the Robotics Olympics in 36th place overall, third out of Caribbean nations and first in the Organization of Eastern Caribbean States.

Neil and the team came back to Basseterre with their heads held high and went right back to work. They were invited back to the competition next year, and hope to increase their success with more time to work on the robot.

“One thing that we hope to do going forward is to open the recruiting process a bit broader,” Neil said. “We want to open the competition to the secondary schools and see how well these students can perform so we can give everyone a chance to be a part of this. We want to make sure that the students are being highlighted, we have heard a lot of negative things about young people, so I’m happy we were able to showcase something positive that is happening.”

The team outperformed expectations and established that St. Kitts and Nevis is capable of producing students who can compete on an international level. The team is ready to continue to build on their success, but will be retiring the robot that took them so far in this competition as a memory of what they can do if they are given the opportunity.

“I want to personally take the time to congratulate the TVEMS Information students for valiantly representing St Kitts and Nevis without being intimidated by the representatives of other countries,” Neil said. “Instead, you were able to form meaningful relationships and in the process create a network [that] secured valuable connections all over the world.

“Thank you. You achieved the impossible. Your performance exceeded that of more than 120 countries in your first appearance at the Robotics Olympics. If this doesn’t deserve the welcome afforded to heroes, there is nothing more that can be said.”