HARRIS… the outlook is for the economy to continue to achieve positive growth with a projected growth rate of 6.7 per cent for 2015 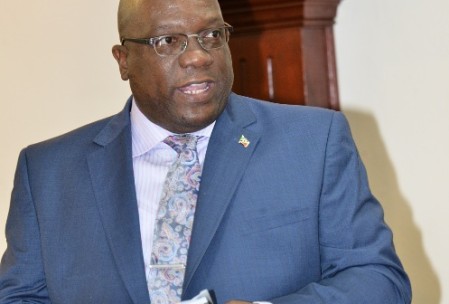 BASSETERRE, St Kitts (CMC) — The St. Kitts-Nevis economy grew by 6.1 per cent last year, and for the first six months of this year the economy has grown to 7.1 per cent, Prime Minister Dr Timothy Harris has said.

Delivering the EC$808.3 million (One EC dollar =US$0.37 cents) budget to Parliament on Tuesday, Harris said that notwithstanding the mixed performance of the global economy, St Kitts and Nevis is on a positive growth path with strong performances in a number of key sectors.

He told legislators that the increase in economic growth was attributed to the buoyancy of the construction sector, fuelled by the Citizenship by Investment (CBI) programme, as well as the recovery of the tourism sector.

He said that as at the end of June 2015, growth in the construction sector was estimated at 12.3 per cent and that the performance of the sector was attributed to the ongoing construction work on two major private sector hotel and condominium developments, coupled with public sector-related projects such as the upgrade of the Dr Kennedy Simmonds Highway and the construction of roads in new residential areas.
Harris said that the economic activity in the tourism sector was estimated to have increased by 8.4 per cent in the first six months of 2015.

“This development reflected a significant increase of 11.5 per cent in the number of stay-over visitor arrivals in the first quarter of 2015 as a result of nationals returning to the Federation to exercise their franchise during that period.”

Prime Minister Harris said that visitor arrivals also increased by 4.4 per cent in the second quarter relative to the comparable period in 2014, and that stay-over visitor arrivals from all of the major source markets recorded increases, primarily Canada (8.1 per cent), the United States (6.5 per cent and the United Kingdom (6.2 per cent).

Prime Minister Harris noted that there were overall increases in agriculture, manufacturing, as well as the final services sector, and that the outlook is for the economy to continue to achieve positive growth with a projected growth rate of 6.7 per cent for 2015.

He said according to a recent International Monetary Fund (IMF) publication entitled Jobs, Wages and Latin American Slowdown, this outturn can possibly be recorded as the highest in the Caribbean, and second in the Latin American region only to Panama.

“The prospects for further expansion of the national economy are contingent on accelerated growth in advanced economies, especially the Federation’s major trading partners and progress of the existing CBI-related real estate projects.”

Harris said that for the 2014 fiscal year, the Government’s recurrent revenue was EC$767.9 million, with EC $383.7 million derived from taxes, while $384.2 million was generated from non-tax revenue.

“Most of the non-tax revenue was derived from fees from the Citizenship by Investment (CBI) programme which heavily influenced the fiscal performance for 2014. Revenue from taxes on international trade and transactions, however, fell below the budgeted amount by 3.1 per cent, Harris noted.

He said recurrent expenditure for 2014 amounted to EC$482.6 million, 7.9 per cent over the approved budget.

But Prime Minister Harris said the combined effect of the Government’s recurrent and capital activities resulted in an overall surplus of EC$235.2 million and a primary surplus of EC$280.8 million.