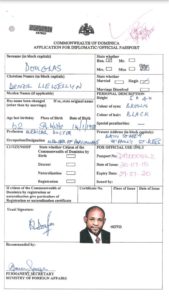 BASSETERRE, St. Kitts – St. Kitts and Nevis’ leader of the Opposition and Parliamentary representative for St. Christopher Six, the Right Honourable Dr. Denzil Douglas, has finally admitted in a sworn affidavit filed in the High Court Registry Feb. 21 that he filled out an application form and was issued a diplomatic passport of the Commonwealth of Dominica, which he has used to travel.

Attorney General of St. Kitts and Nevis the Hon. Vincent told the House Jan. 28 that Douglas was issued a diplomatic passport numbered DP 0000462 by the Commonwealth of Dominica, which recorded him as being a citizen of the Commonwealth of Dominica. “This is borne out by a certificate of exhibits thus filed among the papers at the court,” he said.

The attorney general, acting on advice of Senior Counsel Douglas Mendes of Trinidad and Tobago, is asking the High Court to declare Douglas has vacated his seat in the National Assembly by holding a diplomatic passport of the Commonwealth of Dominica. The Constitutional motion also seeks an injunction to restrain Douglas from taking part in the proceedings of the National Assembly.

Section 28 (1) of the Constitution of St. Christopher and Nevis and Section Six (6) of the National Assemblies Act both provide that “a person shall not be qualified to be elected or appointed as a member if he is by virtue of his own act under any acknowledgment of allegiance, obedience or adherence to a foreign power or state,” said the attorney general.

The parliamentary disqualification case had its first hearing in the High Court today before Resident High Court Judge His Lordship Justice Trevor Ward Q.C. Appearing for the government in the parliamentary disqualification case was instructing solicitor Talibah Byron, who is being led by Senior Counsel Mendes. For Douglas, there were Sylvester Anthony and Angelina Sookoo, who will be led by Senior Counsel Anthony Astaphan.

The Constitutional motion was filed Jan. 23 and an affidavit opposing the motion was filed Feb. 21 on behalf of Dr. Douglas. The government has until March 19 to file and serve its papers in response to what Douglas filed.

The rules of court allow 28 days for a respondent wishing to defend such a motion to file and serve his or her papers in opposition.

Today’s hearing was a routine proceeding, which saw the resident judge give direction for the future conduct of the matter to bring it to a speedy hearing. Senior counsel on both sides agreed beforehand on the terms of their availability and the judge had no difficulty in agreeing to recommendations of counsel.

The case management directions envisage that the next time Douglas appears in court on this matter will be April 20.