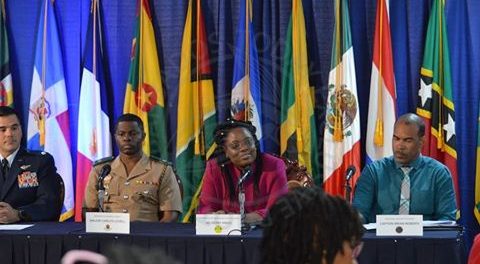 BASSETERRE, ST. KITTS, April 23rd 2017 – Law enforcement officers from the St. Kitts-Nevis Defence Force, Coast Guard and the Royal St. Christopher and Nevis Police Force will be among 800 regional and international security and disaster personnel participating in the first phase of the annual exercise called Tradewinds. It takes place in Barbados in June this year.

The regional multi-agency, multinational security and disaster management exercise held in the region in partnership with the United States. Exercise Tradewinds succeeded a similar exercise, dubbed Exotic Palm, in the 1980s.

Barbados Today reported now in its 33rd year, Tradewinds 2017 is being co-hosted by Barbados and Trinidad and Tobago under the theme Seamless States Partnership for a Secure Region.

Host nation co-director, Major Carlos Lovell told the media in Bridgetown, that this year’s operation also seeks to assemble a multinational Caribbean Community (CARICOM) Task Force under the aegis of the Caribbean Basin Security Initiative, to evaluate the region’s response to significant transnational organized crime and the effects of sudden disasters.

Twenty-one countries, including member states of the Regional Security System (RSS), CARICOM member states, as well as Canada, France, the United Kingdom and the Netherlands are expected to participate, and will include approximately 800 soldiers, sailors, police and disaster management practitioners.

According to him, unlike previous exercises, this year’s operation will adopt a different approach where participants will be trained during the exercise and later tested and evaluated.

“With the support of our international partners and the RSS we have committed to conducting pre-mission training prior to the June 6th start date for Tradewinds. Secondly in accordance with the exercise scenario, we are seeking to combat one common threat in two separate member states with the CARICOM Task Force seamlessly redeploying from one member state to another, to execute operations,” he explained.

In this regard, 120 participants from the RSS will be engaged in a pre-mission training programme to prepare them for the upcoming exercise.

Without divulging the details, Major Lovell said the Barbados leg of the exercise will take place throughout the island, and will include air, land and sea operations. He said it was an opportunity for nationals to participate and gain a better appreciation of the security needs of the island.

“I encourage all Barbadians to volunteer their services as role players for this exercise, as it offers an opportunity for our citizens to deepen their understanding of national emergency management systems and to appreciate the capabilities of our local disaster management practitioners,” he said.

Exercise Tradewinds is a US Southern Command-sponsored security and humanitarian assistance and disaster response focused initiative, which is designed to improve regional cooperation, military and civilian interaction, as well as national and regional capabilities.