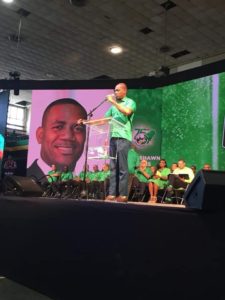 St.Kitts-Nevis Deputy Prime Minister Hon. Shawn K. Richards are among special guests at the 75th Anniversary Conference of the Prime Minister Andrew Holiness led Jamaica Labour Party. Thousands of Labourites from across Jamaica jammed into the arena for the conference, which kicked off at 10:00 am, Sunday Morning Novemnber 18th. The highlight of the conference is expected to be the  main address by party leader and Prime Minister Holness.

Other Special guests at the conference include representatives of like-minded regional political parties, among them the 50-year-old dreadlock Kent Vital, an economist by profession who was elected last year as leader of the Dominica Freedom Party (DFP) once led by Eugenia Charles; and Senator Simon Stiell, Minister of Climate Resilience, the Environment, Forestry, Fisheries, Disaster Management and Information in the Cabinet of Prime Minister Keith Mitchell in Grenada.

The JLP was launched in 1943 under the leadership of its founder, the late national hero who is the founder of the BITU and Jamaica’s first prime minister under independence, Sir Alexander Bustamante.