The Monetary Council of the Eastern Caribbean Central Bank (ECCB) announced in a March 2017 communiqué that its goal is for the ECCU member states to reach “the ultimate 60.0 per cent Debt to GDP ratio by 2030.”

“This [the IMF’s projection], of course, is excellent news.  This, of course, indicates that we are doing better than most…and it [the news] is coming from the most important global entity reporting on fiscal and economic affairs…the IMF,” Prime Minister Dr. the Honourable Timothy Harris said today, Wednesday, August 2nd, 2017, at his press conference. 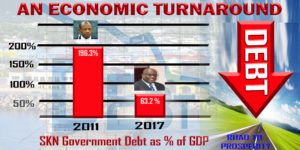 St. Kitts and Nevis’ debt-to-GDP ratio is 63.2%, the lowest among the independent states in the ECCU.

“This, of course, speaks well to our approach to fiscal and economic management,” the Honourable Prime Minister, who is the Minister of Finance, also said.

“It is well known that we inherited a very high debt and that part of our fiscal response is to reduce it,” Prime Minister Harris added.

Dr. Harris continued: “To date, according to the statistics received from the Ministry of Finance, we have paid on the public debt $228.5 million, reducing it by 13% since 2015.”