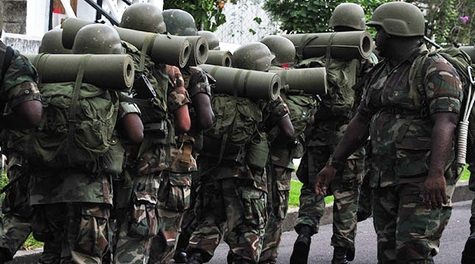 BASSETERRE – The St Kitts Nevis Defence Force has been granted enhanced powers for the next six months as the government continues to fight crime and violence.

This was disclosed by Prime Minister Dr Timothy Harris on Friday who said his administration is committed to making the federation, the safest small island state in the world.

“Exceptional operational, strategic and tactical operations are proactively being done in the interest of citizens and residents’ safety, which my Team Unity administration recognises is imperative to protect, in order to advance the emotional and economic well-being of the people who live, work and invest in our beautiful country,” said Harris, who is also the Minister of National Security.

He said in order to further the goal, a recent proclamation by the Governor General, S.W. Tapley Seaton, granted enforced powers to the Defence Force .

“The Governor-General may, acting in accordance with the advice of Cabinet, call out the Defence Force for service in aid of the civil powers for a period not exceeding six months, with their arms and ammunition, where it is deemed that the resources of the civil powers need to be augmented,” states the act that came into force 20 years ago.

The Prime Minister noted the St Kitts-Nevis Defence Force was called out before and referred to 2011 when then-Governor-General Sir Cuthbert Montraville Sebastian issued an “Instrument for the Call Out of the Defence Force in Aid of the Civil Powers”.

The decision to call out the Defence Force follows a statement made earlier this week by the main opposition St Kitts-Nevis Labour Party (SKNLP) which accused the government of not informing the public about the call out of the Defence Force.

The SKNLP then said that it was in possession of the proclamation by Governor General – dated June 23.

The opposition party said there was no government statement on the decision made by the Cabinet “although the Prime Minister and Minister of National Security Dr Timothy Harris has had the opportunity to inform the nation during the recent sittings of the St Kitts Nevis National Assembly”.

“This is a serious development as it is an indication that Dr Harris and his Government have no confidence in the High Command of the Royal St Christopher and Nevis Police Force”.

The Dr Denzil Douglas led party noted that while it is necessary for the police and defence force to collaborate in the fight against crime “it is withholding of information that gives the Defence Force wide raining emergency powers unknown to the public and without the requisite police training given to the defence force, the risk of abuse of fundamental human rights of the citizens and residents of our country and innocent collateral civilian casualties (similar to) what happened during the Tivoli Gardens massacre (in Jamaica)”.

The party said that the proclamation to call out the defence force coincided with the official announcement by the Prime Minister of the appointment of retired Major General Stewart Saunders of Jamaica as the federation’s National Security Advisor. (CMC)