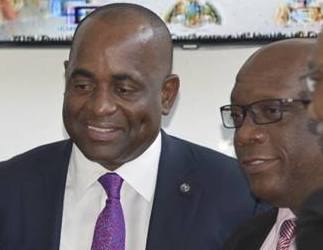 BASSETERRE, St. Kitts, September 24, 2017 (Press Unit in the Office of the Prime Minister) – St. Kitts and Nevis became the first country in Latin America and the Caribbean to offer in kind and monetary support to the storm-ravaged island of Dominica in the aftermath of Hurricane Maria.

Maria, the 13th named hurricane of the 2017 Atlantic Hurricane Season, became a category 5 hurricane near the Leeward Islands on Monday, September 18, as it pummeled the Commonwealth of Dominica as an extremely strong hurricane with catastrophic wind speeds.

In an address to the nation on Saturday evening, Prime Minister, Dr. the Honourable Timothy Harris said in spite of its own significant damages, particularly as it relates to public sector infrastructure, the Government of St. Kitts and Nevis has pledged EC$1 million to assist the neighbouring island of Dominica in its recovery and rebuilding efforts.

The St. Kitts and Nevis prime minister said the Government’s assistance to the Commonwealth of Dominica goes beyond its financial commitment.

“As was extended to Anguilla and other islands that were previously impacted by Hurricane Irma, we have offered the use of the RLB International Airport as a staging platform for relief efforts into Dominica in the wake of Hurricane Maria. In addition to this, all four hospitals on St. Kitts and Nevis will be made available should the need for health services be required.  Places will also be made available to accommodate displaced students in Dominica who are registered for upcoming CXC exams. They will be offered free enrollment into our schools until their own high schools are ready to accommodate them. Furthermore, our Federation will assist in the restoration of electricity supply to Dominica, and our Coast Guard vessels will assist with transportation when and where possible.”

Prime Minister Harris also revealed in his national broadcast that his Government has pledged financial support to other neighbouring islands that were significantly impacted by the recent hurricanes.