St.Kitts Native and US Navy National Ceremonial Guardsman Javed Williams  felt the weight of history on Monday as he helped pull the flag-draped casket out of the gleaming black hearse.

Williams was one of eight U.S. military service members who carried former President George H.W. Bush’s casket into the U.S. Capitol. Bush, who died Friday at age 94, was set to lie in state at the Capitol until 10 a.m. Wednesday, when Williams and his counterparts will lift his casket again and carry it lockstep back to the hearse.

Williams is part of the US Navy Body Bearers, an eight-person unit tasked with carrying the caskets of navy men and women and their family members who are buried in the Washington, D.C., area.

Javed and the other bearers had to withstand the physical strain of carrying the several-hundred-pound casket from the hearse, up the Capitol steps and into the building’s rotunda — all with one arm each.

To build up that endurance, the bearers train underground in the solemn bottom level of a parking garage. They practice hauling every kind of casket imaginable and grind through workouts.

The caskets they carry typically weigh between 400 and 800 pounds.

The 6′-5″ Javed Williams was a former St.Kitts-Nevis National Basketball player and is one dozens of basketballers who were able to gain schloarships to play basketball at US Universities .

He was recruited in 2010 by the University of Alaska in the NCAA Division II Great Northwest Athletic Conference and signed a National Letter of Intent to attend the University.

However he later played for the Black Hawk East College where he was recruited by BJ McCallum.

He is a 2009 graduate of the Sandy Point High School. 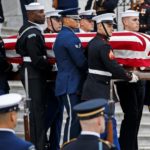 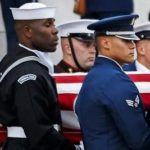 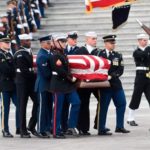 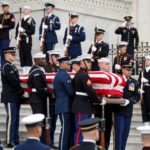 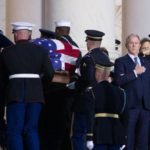 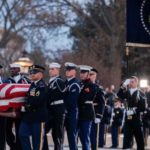 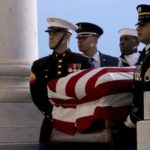 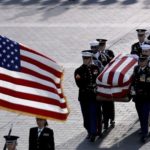 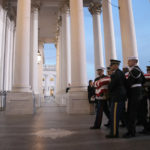 WASHINGTON, DC – DECEMBER 03: A military honor guard team carries the casket of former U.S. President George H. W. Bush into the U.S. Capitol December 3, 2018 in Washington, DC. A state funeral for former U.S. President Bush will be held in Washington over the next three days, beginning with him lying in state in the Rotunda of the Capitol until Wednesday morning. (Photo by Win McNamee/Getty Images) 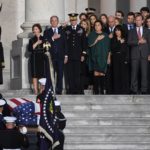 The casket bearing the remains of former US President George H.W. Bush arrives at the US Capitol as former US President George W. Bush (top 2L) and former First Lady Laura Bush (top L) look on in Washington, DC, December 3, 2018. – The body of the late former President George H.W. Bush travelled from Houston to Washington, where he will lie in state at the US Capitol through Wednesday morning. Bush, who died on November 30, will return to Houston for his funeral on Thursday. (Photo by SAUL LOEB / AFP) (Photo credit should read SAUL LOEB/AFP/Getty Images) 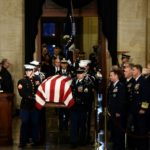 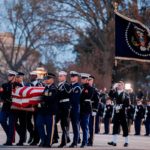 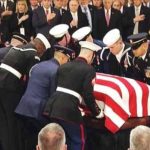 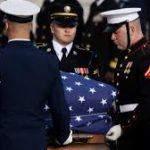 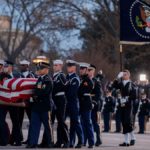 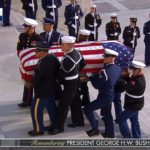 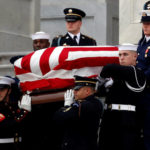 The flag-draped casket of former President George H.W. Bush is carried by a joint services military honor guard from the U.S. Capitol, Wednesday, Dec. 5, 2018, in Washington. Alex Brandon/Pool via REUTERS