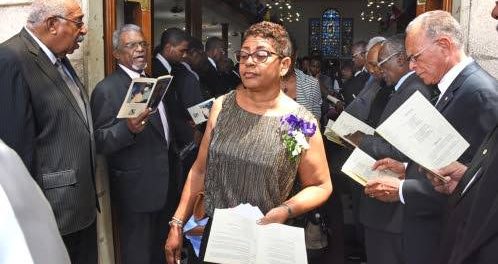 Charmlyn Smith, wife of Dr Freddy, exits the UWI Chapel after the service of thanksgiving for her late husband.
Tweet 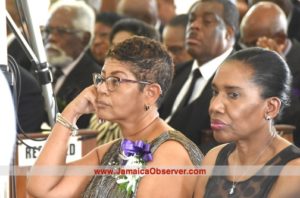 Dr Frederick Smith’s wife Charmlyn (left) and a family friend listen to one of the many tributes being paid to the late gynaecologist. (Photo: Michael Gordon)

BASSETERRE, ST. KITTS, April 23rd 2017 – A St. Kitts-born medical doctor has been praised as an unsung hero for his 40 years of service to Jamaica.

“He shall long be remembered as our unsung hero,” said Carol Samuels, who gave the family tribute at the funeral service of St.Kitts born Dr. Freddie Smith .

“DR Frederick Ronald Clifton Smith JP lived a life that touched many people, and this was evident by the hundreds who gathered at the University chapel on Saturday, April 1, to pay their final respects to the former medical practitioner, family man and devout freemason.

Smith was a seasoned veteran in the field of obstetrics and gynaecology, having over 40 years of experience under his belt through his private practice and his years of public service at the Kingston Public Hospital.

Smith, who was born on February 4, 1956 on the island of St. Kitts to Clifton, a Guyanese, and Jocelyn Smith, a St Kittitian, passed away suddenly in the early morning of March 18. He was 61 years old.

“Freddy”, as he was known to his family and close friends, emigrated from St. Kitts to Jamaica with his family at the tender age of five. Upon his arrival, he was enrolled at the Rollington Town Primary School, but soon after transferred to the St. Aloysius Primary where he completed the remainder of his primary studies before matriculating to the prestigious Kingston College (KC).

During his seven years at Kingston College (1967-74), Smith excelled in his scholastic endeavours and, according to Ian Jackson — a former headboy at KC and a lifelong friend, who gave a tribute on behalf of the Kingston College Old Boys’ Association — Smith constantly ranked either first or second each year as the school’s top academic achiever — an enviable feat.

Jackson recalled Smith as an “exemplary student and a quiet giant who was and is the person who perfectly epitomised the Kingston College motto of “Fortis Cadere Cedere Non Protest: The Brave May Fall But Never Yield.”

Graduating from secondary school with O’ Level subjects numbering in the double digits, Smith subsequently pursued his studies to become a medical doctor at The University of the West Indies, Mona, after which he chose to specialise in the area of obstetrics and gynaecology.

In a tribute read by Carol Samuels on behalf of the family, “Freddy” was remembered as a man small in physical stature, but one who dared to care and had the heart of a giant.“He was a brilliant individual and there will never be another man quite like Freddy,” Samuels added.

Smith’s sister Paula Grey described him as her “personal diary,” and a big brother who was always there as a shoulder she could always cry on.

Smith was an avid lover of sports, athletics in particular, and was a quintessential Fortis flag-bearer; one who was especially revved up during Boys’ and Girls’ Championships.
Before delivering the remembrance and reliving childhood memories she shared with Smith on Riverside Drive in the Harbour View community, Michelle Wilson-Reynolds expressed the shock she and her family felt upon hearing of the passing of her lifelong friend. “My family and I were very shocked to hear of our Freddy’s death,” she explained.

Giving those present at the thanksgiving service some insight into what a young Frederick Smith was like, Wilson-Reynolds revealed that he was a “gifted boy with an extremely bright mind”, but added that Smith, although very brilliant, “was equally reserved to put his brilliance on public display”.

She also recalled a moment of laughter she always shared with Smith over the years whenever she reminded him of the time he wanted to test the theory of whether or not cats had nine lives”.

“Freddy was a determined individual who was very persuasive in his endeavours and eventually convinced me to allow him to throw my pet cat into the air,” she explained. “To my astonishment, Freddy threw my cat several feet into the air which caused me to scream on top of my lungs, a scream which the entire community heard and one which attracted several police officers to the premises.”

It was a story which had the listening congregation engulfed in laughter. She also spoke about his “bizarre but equally hilarious” practice of pouring cold grape soda on patties in an effort to cool it down so he could have it quickly.

In the homily delivered by the Very Reverend Peter Clarke, the congregation was reminded that “although we live in a world of fear,” that “God had not given us a spirit of fear” and, like Smith, “we should be brave in all of life’s endeavours, having God as our spearhead.”

In same stead, Dr. Courtney Palmer, who delivered the oration on behalf of the masonic fraternity, reminded those present that “as humans we are all mere mortals who come from dust and to dust we must all and will all return.”

Smith leaves behind his wife Charmlyn, daughter Gail Marie, and sons, Andrew and Jordan, as well as brother George (Barry) and sister Paula.

Photo 1 – Charmlyn Smith, wife of Dr Freddy, exits the UWI Chapel after the service of thanksgiving for her late husband.