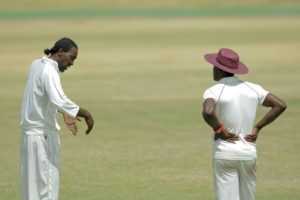 St.Kitts Basketball Star Forward Sheeno Berridge is making his mark on the regional Cricket scene. The Sandy Point Kings forward of the St.Kitts-Nevis Basketball League is a member of the 14 man West Indies “B” Team presently touring Canada as they take part in the Cricket Canada Summerfest, that runs until September 7th.

Berridge, the 27 year-old Basketball Small Forward and youthful fast  bowler, impressed selectors in his First Class debut during the current 2017-2018 season. He tallied 24 wickets at an average of 22.63 and helped his team to finish third in the league.

In an interview with Jamaica Observer back in January, Berridge said, “it’s been hard work; “I did some work with the CPL [Caribbean Premier League] teams and with international teams coming in, always going in the nets and bowling,”.

Coach Winston Benjamin saw Berridge’s potential from his work in the Nets and gave the young 2 sport star the opportunity.

Coach Benjamin told the Observer, “when I saw him first I was wondering why he wasn’t in the set-up earlier. I had a word with him, and I said, ‘Listen, we’re going to need you,’ and he said every coach that came around told him the same thing. Benjamin said to him, ‘I’m not every coach, and I know what I’m seeing and I know what I want.’

The rest was history: Berridge is now gaining additional exposure. The Windies team will be involved in a series of Twenty20’s and 50 over games against Canada ‘A’, Canada’s senior men’s team and the Toronto Bears.

Berridge is also a major part of the SKNABA Championshio Team the Sandy Point Pride Kings and  a St.Kitts National Basketball Squad Selectee.