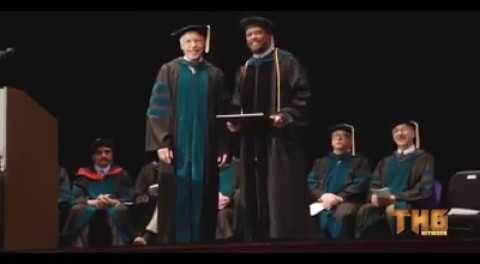 Hon. Mark Brantley, Deputy Premier of Nevis (right) with Dr. John P. Docherty, Chairman of the Board of Trustees of the Medical University of the Americas and the Saba University of Medicine, moments after he presented Mr. Brantley with an honorary Doctor of Laws degree at the commencement ceremony, at the Veterans Memorial Auditorium in Rhode Island, USA, on June 03, 2017
Tweet 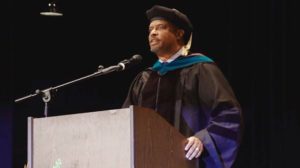 St.Kitts-Nevis Minister of Foreign Affairs and Deputy Premier of Nevis Hon. Mark Brantley was on Saturday, 4th June 2017, awarded the honorary degree of Doctor of Laws at the commencement ceremony for the Medical University of the Americas and the Saba University School of Medicine in Providence Rhode Island.

The honorary Doctor of Laws degree was bestowed on an unsuspecting Mr. Brantley, by Dr. John P. Docherty, Chairman of the Board of Trustees of the MUA and the Saba University of Medicine, at their Commencement Ceremony at the Veterans Memorial Auditorium in Rhode Island, USA, moments after he delivered the commencement address to the graduating class at which over 400 students received their degree in Medicine. 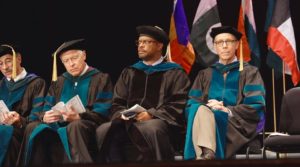 Mr Brantley, who is also the Minister of Health in the Nevis Island Administration (NIA), told the Department of Information he was pleasantly surprised at the gesture.

“I was very surprised when at the end of my speech I was asked to remain standing and I was awarded an honorary degree of doctor of laws,” he said. 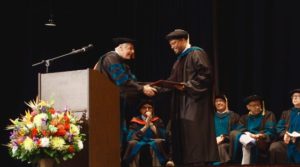 Mr. Brantley, who is often referred to as “Sheriff” in political circles,  also thanked the University, for what he described as a tremendous honour.

“I believe the award of this honorary doctorate is a tremendous honour and I would want to express my deep appreciation to the Medical University of the Americas and the Board of Trustees for bestowing an honour on me.

“I look forward to continue to serve with distinction and to participate in the development of our nation” he said.

The MUA campus has been in Nevis since 1998, and is thought of as maybe the most best-kept secret in medical schools.

The 10-acre facility at Potworks, over the years, has become an integral part of the community. The University has also partnered with the NIA to provide scholarships for students wishing to study in various areas of health and education offered at the MUA or other US or Caribbean based institutions.