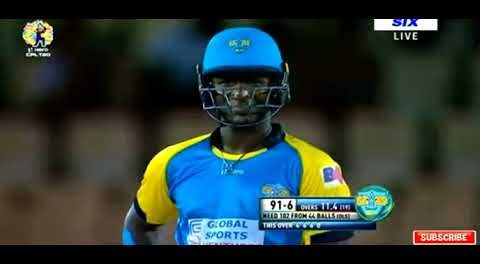 Shane Watson (left) and Darren Sammy during a recent game.

Less than a year after being sacked as the West Indies T20 Captain St.Lucia’s Darren Sammy has been once again sacked as Captain for yet another T20 team. After suffering six straight losses in the ongoing edition of the Caribbean Premier League, St. Lucia Stars have dumped Darren Sammy as the captain and appointed Shane Watson in the role for the remainder of the season.

Marlon Samuels has been named vice-captain.

“After six successive defeats in the 2017 season, the time is right to make a switch in leadership and incorporate some fresh thinking as the team completes this season and builds for 2018,” the franchise said in a statement on Thursday (August 17).

“The Stars management would like to take this opportunity to thank Darren Sammy for his contribution as captain this season and throughout the last four editions of Hero CPL,” it added.

Sammy, who led Windies to two World T20 titles, however, remains in the Stars’ squad for the ongoing edition of the domestic T20 league.

“Darren is a St. Lucian icon and has been a fantastic servant of both St. Lucian and West Indian cricket. The Stars management would like to stress that Darren remains an important part of the St. Lucia Stars squad and his performances with both bat and ball will be vital for the rest of the 2017 tournament and in the future.”

Stars have been confined to the bottom slot in the six-team CPL points table, having lost all their encounters in the season thus far. With four more league games to go, the management believes the side needs a fresh approach to finish the tournament on a high.

“If it were not for Darren, St. Lucian cricket would not have the standing it does in world cricket and his ability to lead both on and off the field remains unquestioned. However, after the results that we have seen over the first half of the 2017 Hero CPL, a change is needed to freshen things up as we look to win the remaining four fixtures this season,” said Stars’ owner Jay Pandya.

However Watson, who also captains Sydney Thunder in Big Bash League back home, has not had a great season with the bat thus far. He’s scored only 44 runs – with a best of 32 – in the four outings for Stars and hasn’t bowled at all.