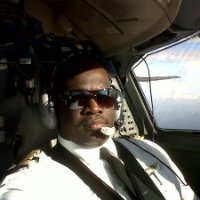 LIAT pilots stayed away from flying planes Friday afternoon after they were called to an Emergency Meeting by  President of the Leeward Islands Airline Pilots Association (LIALPA) Carl Burke.
In a memo written to members Burke said he was forced to call the meeting of all pilot members in Antigua at 12 noon at the company headquarters.
“It has been brought to my attention that LIAT has gone ahead and authorized the training of a NON-LIAT pilot on a LIAT ATR Aircraft with a MEMBER of the ASSOCIATION this morning.”
That act by LIAT was considered so egregious, Burke was compelled to act. He also asked the Barbados based crews not to operate any further LIAT services until they contacted him.
LIAT was forced to cancel several flights Friday afternoon after pilots engaged in industrial action.
Earlier this year, between June 7 and June 9 LIAT’s pilots launched on strike action after management appeared unwilling to implement the promised pay increase for pilots who were being required to fly the larger ATR-72 aircraft.  The strike ended after management and LIALPA signed an agreement for pay increases but not before costing the airline $7 million.
The three day strike cost the airline $7 million in revenue.