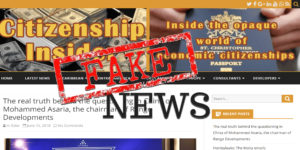 An article published today on Citizenshipinsider.com, a website, called ‘The real truth behind the

questioning in China of Mohammed Asaria, the chairman of Range Developments’ is riddled with false

information about who is running it, attempts to discredit certain market participants, including the

others by making allegations intended to cause them damage.

“This kind of fake news story is not only damaging, but disappointing,” said Mohammed Asaria, founder

of Range Developments. “I am particularly concerned that this article has been circulated to citizenship

agents by competing developers to steal our business.”

Developments called for the promised redemption of their shares.’ FACT: Range Developments

never made any promise to redeem shares, nor have there been any requests for redemption

from any Chinese investors.

questioning.’ FACT: Mr Asaria was neither questioned by police, nor detained, nor arrested, not

told he would be required at a police station for further questioning. Mr Asaria left after the

event as he had to be in Geneva for the IMC event.

Senses..’ FACT: Mr Asaria made no secret of the fact that he had been in China for the launch

of the Six Senses St. Kitts. Mr Asaria has promoted on social media his presence in China and

his appreciation to Delsk for arranging the event.

liable for its promises to redeem their shares now that their promised five years are over.’

FACT: There is no group of investors in China requesting a town hall meeting to the best of

Range’s knowledge, nor did Range Developments promise to redeem any shares after five

“This protest was clearly for the benefit of social media,” said Mr Asaria. “I met with a woman who said

of yield during construction. I showed her documentary proof that her purported client had

been paid, and she left. It was all concluded in a professional manner.”

It is clear that the sole purpose of the article is to damage Mr. Asaria’s and Range’s reputation among

investors, especially within China. Range has engaged legal counsel and will pursue all available

remedies and seek the maximum damages available under the relevant laws. 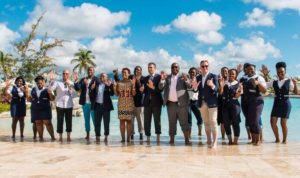 eastern Caribbean that are well-designed, sustainable and desirable. The Park Hyatt St Kitts, which

opened on November 17, 2017, topped a list of best new hotels in the Caribbean according to CNN.

The recently launched Six Senses St. Kitts will be set on the site of a former sugar plantation with

gentle hills rolling down to a long stretch of sandy beach fronting the Caribbean Sea, and is due to

open in 2021. Range is also the developer of the Cabrits Resort Kempinski in Dominica, the first

Program. A minimum investment of US$ 220,000 in the project will entitle investors and their families

to a citizenship of the Commonwealth of Dominica. It is the most advanced of any governmentapproved

project on the island.