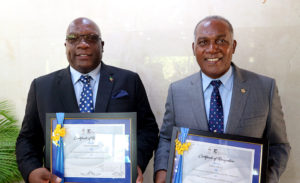 BASSETERRE, St. Kitts, October 10, 2018 (Press Unit in the Office of the Prime Minister) – Dr. the Honourable Timothy Harris and his Cabinet colleague, the Honourable Vance Amory were among some 70 past students of the University of the West Indies (UWI) who were duly recognized by the regional institution for having excelled in their respective career paths.

The ceremony to honour the university’s 70 outstanding alumni was held on Wednesday, October 10 at the Quadrangle on the Main Campus of the University of West Indies Cave Hill Campus. It formed part of UWI’s celebratory activities being held in recognition of its 70th anniversary of service and leadership across the region.

Among the 70 honourees were past and present Caribbean prime ministers, distinguished members of the legal fraternity, leaders in the financial and economic sphere, as well as top regional educators.

The ceremony was held under the patronage of Her Excellency the Governor General of Barbados, Dame Sandra Mason, GCMG, DA, QC, who was also among those recognized.

Speaking to the Press Unit in the Office of the Prime Minister after receiving his plaque of recognition, the Honourable Vance Amory, Senior Minister in the Team Unity administration of St. Kitts and Nevis said he was humbled to be recognized in such a way.

“It is really humbling and it makes you wonder about what you have done in your life,” Minister Amory confessed. “It is a real honour for me to have been recognized by the university and I want to thank all the persons, all of the professors who had any part in my training here at the university at Cave Hill and to those people with whom I worked with over the years in different areas of endeavor in education, in banking, in public service and then in politics.”

The former Premier of Nevis graduated with a Bachelor’s Degree from UWI in 1973.

Prime Minister Harris, who was among the first recipients of the UWI 70 at 70 recognition award, was also very appreciative of the recognition from his alma mater as he noted, “I feel very honoured and very special to have been chosen, very judiciously, to be among the 70 graduates of the university to be recognized today, and of course there’s a feeling of nostalgia of my own days at the university here from 1986-1988.” 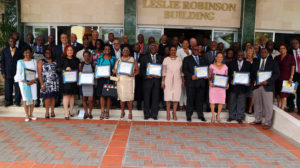 Dr. Harris graduated from the Cave Hill Campus in 1988 with a First Class Honours Degree in Accounting, having won the coveted Victor Cooke Prize for Best Accounting Student.  In 1992, Dr. Harris then graduated at the top of his class from the St. Augustine Campus with a distinction in the Master’s Degree Management Studies Programme.

“The history of that is having gone to Canada to pursue that PhD. I somewhere in the middle, fate perhaps, would have resorted to a life of public service and leadership in politics, and today’s award and honour recognizes that I have made what they have described as an outstanding contribution in the field of public service and leadership,” the prime minister added. “And so I want to thank God for the humbled beginnings, thank God for the experience and thank Him that a journey I myself had not imagined could be completed so that I can be recognized still relatively young.”

Even after his graduation, the St. Kitts and Nevis Prime Minister continued to serve the institution in various capacities including serving on several councils and committees for the university, as well as leading the settlement efforts for arrears owed to UWI by regional governments.

Prime Minister Harris continued, “The University has been a critical part of my life and my professional development [and] to have them recognize that I have been an outstanding alumnus of the university is for me a single honour, and so I wish that the university could grow from strength to strength.”