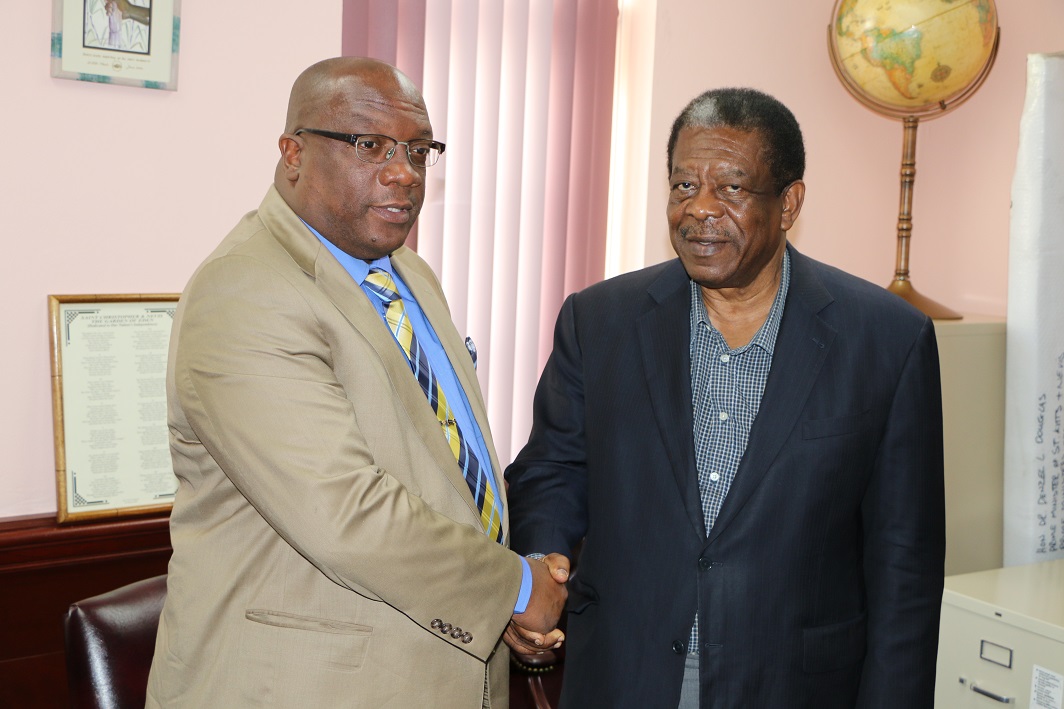 Addressing Prime Minister Harris as Head of Government, Sir Dennis said “I want to personally congratulate you and your Government on assuming office in February of 2015”.

In welcoming Sir Dennis as President of the CCJ, Prime Minister Harris said he was pleased with the “important innovations to the judiciary” that Sir Dennis brought to the ten year old CCJ which has two jurisdictions, an original and an appellate one.

In its appellate jurisdiction, the CCJ hears appeals as the court of last resort in both civil and criminal matters from those member states which have ceased to allow appeals to the Judicial Committee of the Privy Council. Only four countries have signed on to the CCJ as their court of last resort: The Republic of Guyana, the Commonwealth of Dominica, Belize, and Barbados.

Prime Minister Harris told Sir Dennis that he has “been in the vanguard of reforms of the judiciary, thereby ensuring greater utilization of the court.” He congratulated Sir Dennis for championing the cause of Caricom countries joining the CCJ as their court of last resort. By doing so, they are joining more and more former dominions and colonies who have abolished the Judicial Committee of the Privy Council in the United Kingdom as their highest court of appeal since the 1940’s, and  deciding to create their own top level courts rather than rely on the Judicial Committee of the Privy Council.

Sir Dennis used his visit to apprise the members of the Cabinet of some of the achievements of the CCJ during the last 10 years. He said that the CCJ has established a solid track record and played a leading role in jurisprudence in addressing some key issues that have not been addressed anywhere. He also said that the CCJ has had over 160 appellate matters in the region brought before it, which he acclaimed as “an excellent record.”

Sir Dennis, who is a Kittitian-born legal luminary, has more than 30 year’s experience as a judge. Having served as a former chief justice of the Eastern Caribbean Court of Appeal, Sir Dennis succeeded Justice Michael de la Bastide, (a former Trinidad and Tobago Chief Justice) as the second President of the CCJ in 2011.  He was knighted by Queen Elizabeth 11 in 2000 and appointed as a Member of Her Majesty’s Privy Council in 2004. He has also served as President of the International Criminal Tribunal for Rwanda.

On the CCJ’s 10th anniversary on April 16, 2015, Sir Dennis said in a media release that he “is hopeful that all member states of CARICOM will give the CCJ a 10thanniversary gift of full accession to the court.”

At the anniversary celebrations of the court at its headquarters in Port-of-Spain, Trinidad and Tobago, he quoted from Trinidad and Tobago calypsonian, Singing Sandra, in her 2005 composition in which she said “to foreign masters you bow, look how them judges in London making final decisions for we. To them judgment we must keep bowing, most insulting indeed, why to their council we must be privy.”

The Agreement Establishing the CCJ was signed on 14th February, 2001, by the Heads of Government of 12 CARICOM countries. By signing the agreement, the Heads of Government showed that they were in support of the CCJ and wanted their country to be a part of it. The CCJ began operations on Saturday 16th April, 2005, with its seat being in Trinidad and Tobago.

Sir Dennis said that the notion that the CCJ will not be independent because of political interference is a misnomer because judges are appointed by the Regional Judicial and Legal Services Commission (RJLSC), which is an independent, non-political body of eleven persons who are responsible for the selection, hiring and discipline, and fixing the terms and conditions of judges and staff of the Court.