Basseterre, St. Kitts, January 26, 2016 (SKNIS): In Tuesday’s Sitting of the National Assembly (January 26), Prime Minister, Dr. the Honourable Timothy Harris, reported figures with respect to how many persons have become economic citizens under the St. Kitts and Nevis Citizenship by Investment (CBI) Programme, something that had been veiled in secrecy under the Douglas-led regime for over 20 years, despite requests by the media and people for that information.

Prime Minister Harris disclosed that “as of the 31st of December, 2015, there were 10, 777 primary passports issued under the CBI programme.” 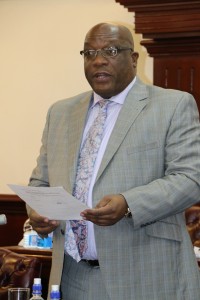 Prime Minister Harris said that although obtaining records of the issuance of passport before 2005 had proven to be “an onerous task”, the introduction of the Machine Readable Passport Management System in June of 2006 allowed for the government to gain access to such records through collaboration between the Ministry of National Security and the company responsible for the supply of passports and the development, maintenance and support for the system.

As a result of this collaboration, the prime minister said that he can now “account to the country on the number of passports issued to economic citizens under the Citizenship by Investment Programme.”

He further reported that passports were issued to economic citizens from 127 countries across all continents, stating that data indicate that the programme is most popular in Europe and Asia.

He said that it was important to note that CBI Programme had been abused and misused by the former Douglas Administration, resulting in the people of the Federation for a long time demanding a report on the number of passports issued under the programme.

“The demand had become huge in the context of the fact that in 2014 the last administration let the country down and citizens down,” said Dr Harris, who further recounted that “in March of 2014, the records would show that the US Treasury Department, through FINCEN, indicated that the Douglas Administration was allowing illegal and illicit actors to participate in our passport programme and that it had become a security risk to that country. Six months thereafter, in November of 2014, the Government of Canada told us that it was forced to withdraw visa free access on account of mismanagement.”

The Government of National Unity has been successful in providing reform to the programme since its February 2015 election to office. On Tuesday morning, Dr. Harris reiterated the commitment to ensure that “never again would the good name of Kittitians and Nevisian be rubbished through the mud of illicit activity.”

“Today is a seminal moment in the accountability relationship between the government and people. Today, Team Unity demonstrates it trusts the people with information and it further demonstrates our deep respect for the people,” Prime Minister Harris said, adding that  “so deep is our respect and our accountability to the people that we honour their request to learn more of this particular programme.”