BASSETERRE, St. Kitts, June 17 (Press Unit in the Office of the Prime Minister) – Kittitians and Nevisians living in Toronto, Ontario, will have an opportunity to hear of the numerous developments taking place in St. Kitts and Nevis under the Team Unity Government, when Prime Minister Dr. the Honourable Timothy Harris and Minister of Foreign Affairs, the Honourable Mark Brantley host a town hall styled meeting there on Sunday, June 18.

Prime Minister Harris and Minister Brantley are expected to update nationals on the stewardship of the Team Unity Administration since assuming office in 2015. 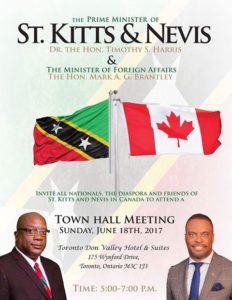 The ministers are also expected to comment on measures being undertaken to repair and strengthen the relationship between St. Kitts and Nevis and Canada – one of the Federation’s oldest allies.

Sunday’s meeting, which will be held at the Toronto Don Valley Hotel and Suites, forms part of the participatory democracy that characterizes the Dr. Harris-led Team Unity Administration.

Earlier this year, the Government went the length and breadth of St. Kitts in a series of town hall meetings focusing on Government’s efforts to promote accountability, good governance and prosperity. Those meetings were well received and attended by a wide cross section of society.