St. Kitts and Nevis announced this new initiative in a press release September 22 under its Citizenship by Investment Programme (CBI).  At a meeting of the Cabinet Friday (Sept.22) it approved a Hurricane Relief Fund which is to be hosted by the Citizenship Investment Unit.”

Soon after the press release was issued Dr. Douglas took to the airways calling the government new initiative deplorable and claimed that it was a direct effort to undermine the hurricane recovery efforts of Antigua and Barbuda and Dominica,

“I make reference to a statement from The Citizen By Investment Unit(CIU)…In making this announcement, the prime minister has reported that two category 5 hurricanes have made land fall in St. Kitts and Nevis causing phenomenal devastations to homes to businesses and to key infrastructure in our country.”

But, Dr. Douglas apparently didn’t read the statement very well. Prime Minister Harris actually said, “Although Hurricane Irma and Maria did not make a direct hit on the Federation, they caused significant disruption and dislocation  to the public sector  with substantial damages in excess of EC 150 million . Private sector damages are still being assessed.”

“The government of St. Kitts and Nevis would like to be in a position to provide assistance to its citizens and to make funds available for a speedy recovery to the economy. It is therefore being recommended that a new fund, the Hurricane Relief Fund, be established under the Citizenship by Investment Programme to provide such relief.” 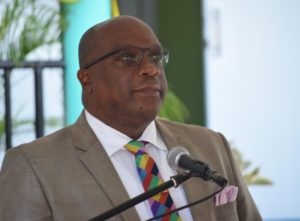 The press release further quotes Prime Minister Harris, “The ethos behind citizenship by investment is about opening up the Federation to investment that will have a direct impact on the quality of life of its citizens.

‘The Hurricane Relief Fund is an attractive option for citizenship applicants in the way it fulfills their own desire to make a positive impact on the environment in which they are seeking to play an active part. It enables the country and its people to recover more quickly and to ensure that the infrastructure and people’s homes are fit and habitable where they have been damaged by this season’s hurricanes.”

Prime Minister Harris spoke to The Observer Sunday about the issue. He detailed his government’s efforts to assist Dominica and Antigua and Barbuda.

“Our cabinet approved an offer of EC$1,000,000 to the government of Dominica in the wake of Maria,  and we did the same thing two-years-ago in the aftermath of TS Erica . In a similar vein of generosity the cabinet offered EC$400,000 each to the governments of Antigua-Barbuda and Anguilla. Our generosity   did not stop there , we went further  and offered the BVI a contribution of EC$500,000. We also showed consideration for  St.Maarten and offered the sum of EC$200,000 . In addition we’ve also made in kind commitments including access to our hospitals, free enrollment of students of countries negatively impacted by the hurricanes. We are satisfied in such a time like this that we are able to be our brothers keeper. ,” PM Harris said.

The Prime Minister went on to state the St. Kitts and Nevis Citizen by Investment programme is the oldest such program in the world, starting in 1984. He made the point that the press release of September 23 to which Dr. Douglas referred stated, “It is hoped that the fund will grow sufficiently to be in a position to extend support to neighboring countries in the Caribbean who have been affected this season’s hurricanes.”