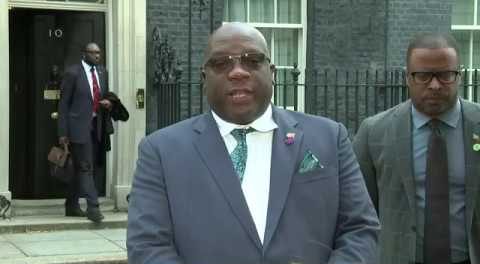 BASSETERRE, ST. KITTS, APRIL 17th, 2018 (PRESS SEC) – St. Kitts and Nevis’ Prime Minister, Dr. the Honourable Timothy Harris, emerged from today’s meeting at 10 Downing Street in London, England as a leading voice for the tens of thousands of people of Caribbean descent who have lived in the United Kingdom for decades, but are finding difficulty in documenting their status. 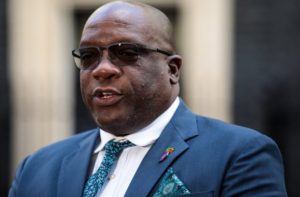 PM Harris speaking after meeting with PM Theresa May

Speaking to the international press after the significant meeting held in the margins of the Commonwealth Heads of Government Meeting, Prime Minister Harris said, “What we can do is to take the Prime Minister’s [H.E. the Rt. Hon. Theresa May’s] word to have our high commissioners here in London work with the government to ensure that information is being shared and that the words of the government certainly would be matched with quick action.”

The Prime Minister of St. Kitts and Nevis also said, “It is regrettable that the circumstance in which we now find ourselves was allowed to get this far, but nonetheless we want to consecrate the future.”

Dr. Harris added, “We hope that these troubling issues that are impacting the migrant population would not surface again.”

Prime Minister Harris was referring to the so-called Windrush row, which is centred on “the Windrush generation” named in reference to immigrants who relocated to Britain to fill labour shortages after World War II. The post-war mass migration started with the arrival at Tilbury Dock, Essex on June 22nd, 1948 of close to 500 Caribbean passengers. They arrived on the SS Empire Windrush.

Under the 1971 Immigration Act, which came into force on January 1st, 1973, all Commonwealth citizens already living in the United Kingdom received indefinite leave to remain. However, the Home Office kept no records of persons who were granted leave to remain and neither did it issue any paperwork to them in relation to the matter.

The Prime Minister of the United Kingdom, H.E. the Rt. Hon. Theresa May, apologized today, Tuesday, April 17th, 2018, to 12 Caribbean heads of government for “any anxiety that has been caused” in light of media reports about incidents of harsh treatment suffered by “the Windrush generation.”

Prime Minister May said, “…I want to reiterate how much we value the contribution that has been made by Commonwealth citizens who’ve made their life here in the UK to the United Kingdom.” H.E. the Rt. Hon. Theresa May then made particular mention of “the Windrush generation” who she said, “helped to build the country that we are today.”

Prime Minister May added, “I want to dispel any impression that my government is in some sense clamping down on Commonwealth citizens, particularly those in the Caribbean who’ve built a life here.”

The Prime Minister of the United Kingdom continued, “I take this issue very seriously. The Home Secretary [the Rt. Hon. Amber Rudd MP] apologized in the House of Commons yesterday for any anxiety caused, and I want to apologize to you today because we are genuinely sorry for any anxiety that has been caused.”

The row came to a boil yesterday when the Rt. Hon. David Lammy, a Labour MP, gave a blistering speech, declaring that, “This is a day of national shame…”

Home Secretary Amber Rudd said in the House of Commons yesterday, “I do not want any of the Commonwealth citizens who are here legally to be impacted in the way they have.” She described as “wrong” and “appalling” some of the ways that they have been treated.

“I am sorry,” Home Secretary Rudd added Monday, one day before Prime Minister Theresa May apologized to the Caribbean leaders.