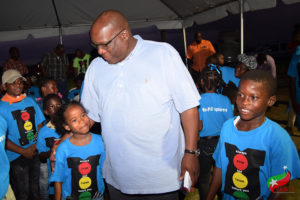 BASSETERRE, St. Kitts, October 17, 2017 (Press Unit in the Office of the Prime Minister) – St. Kitts and Nevis’ Prime Minister, Dr. the Honourable Timothy Harris, believes every child deserves the chance to grow up in an environment free of drugs and crime – an environment conducive to the development of each of their talents, and one that leads to them living healthy and productive lifestyles.

“Give our young people a chance to bloom, to blossom [and] to do so naturally, so they are able to add to their God-given talents,” Prime Minister Harris said while addressing the parents and guardians of the members of the Mol-Phil Explorers Youth Club on Saturday, 14th October, 2017 at the Phillip’s Village Hard Court.

“We are saying to those in the community that you may have chosen a certain path and a certain way of life, [but] please don’t impose that path and way of life on our young people if it is going to do them harm, tarnish their reputations and prevent them from fulfilling their life’s dreams.”

Dr. the Honourable Timothy Harris, who is the lead spokesman in the CARICOM Quasi Cabinet with responsibility for Health, made a passionate plea to the older members of the community to take every reasonable measure to keep drugs out of the hands of children. In order to strengthen his plea, Dr. Harris cited information provided by the Ministry of Health that links the use of, and dependence on, marijuana and other drugs to mental health disorders.

“Just last week, the Chief Medical Officer was saying that one of the greatest causes of problems within the health sector was the dependence upon marijuana in our communities,” Prime Minister Harris said. “We are saying that we want our young people to be free of drugs, including marijuana. It doesn’t matter what those who use it call it, it doesn’t matter how natural they say it is; the evidence about its application and use in St. Kitts suggests it is harmful and it destroys the potential of our young people to be at their very best.”

The Prime Minister of St. Kitts and Nevis charged parents and guardians to take a stand in ensuring that their children are given a fair chance to reach their full potential.

Dr. Harris added, “Those of you have friends coming to your premises smoking, stop them from doing that. For the sake of your child, I am appealing to you – stop allowing anyone to come near them who are involved in drugs, in guns or any other form of lawlessness. Give them a chance for a wholesome life. As difficult as it is for you to take a stand, it is a stand that you must be prepared as a parent to take on behalf of your child.”

Prime Minister Harris emphasized that community-based groups, such as the Mol-Phil Explorers Youth Club, can be used as a positive outlet for children.

The Mol-Phil Explorers Youth Club was formed under the umbrella of the Ministry of National Security’s social intervention programme, which is part of the ministry’s broader crime prevention strategy and geared towards strengthening character and promoting positive behaviours in young people.