BASSETERRE, ST. KITTS, March 15, 2018 (PLP PR Media Inc.) — After last year’s historic hosting of its inaugural Annual National Convention in Constituency Number Seven, the Peoples Labour Party (PLP) a constituent member of the Team Unity Government that is led by Prime Minister Dr the Hon Timothy Harris is once again bringing its convention to the people.

The Peoples Labour Party’s second Annual National Convention will be held on Saturday March 24 at the Patsy Allers Playing field in West Basseterre. Information from the party’s secretariat has confirmed that party officials, delegates, members and well-wishers will be meeting at the venue starting 2:00 p.m.

The inaugural National Convention was held on Saturday March 25 last year at the Recreation Grounds in Tabernacle Village. The hugely successful event was attended by hundreds of party members and was bolstered by the presence of leaders and members from the other constituent parties, the People’s Action Movement (PAM) and the Nevis-based Concerned Citizen’s Movement (CCM).

Preparations are in top gear to prepare the Patsy Allers Playing field to accommodate the hundreds of supporters from the three parties in the Team Unity Government as well as overseas delegates and invitees. PLP’s Secretariat reports that all the eight Peoples Labour Party Branches have finalised their delegates’ lists.

At the successful National Convention last year, the Peoples Labour Party National Political Leader Dr the Hon Timothy Harris said: “Our pitching of our tent here, signals to you the people of St. Kitts and Nevis that we will never lose ground with you the people. We are anchored. Like Walter Rodney’s groundings with his brothers, the PLP aims to be the most effective grassroots Party in the region.” 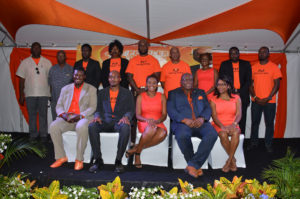 National Executive Members of the Peoples Labour Party (PLP) pictured last year after their election at the Inaugural National Convention which was held in Tabernacle Village.