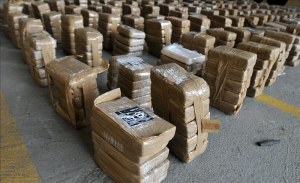 Two suspected drug traffickers, identified as Dominican nationals, have been taken into custody in Martinique, after the seizure of 416 kg of cocaine was seized off the coast of Dominica, according to French media reports.

Online publication Martinique 1ere, reported that the drug bust was the result of a counter-narcotics operation which occurred between Sunday 26 and Monday 27 May 2019, ,

The Martinique 1ere article said the frigate Ventose, supported by a helicopter, intercepted a go fast boat in which the cocaine was found.

It said two men in the boat refused to respond to calls by the Frencjh authorities to stop and proceeded to dump bales into the sea.

It was only after law enforcement authorities fired warning shots that the vessel stopped, it was reported.

The two, aged 31 and 38, were arrested and charged with multiple offences including illegal drug trafficking. If convicted, they could be sentenced to 30 years in jail.