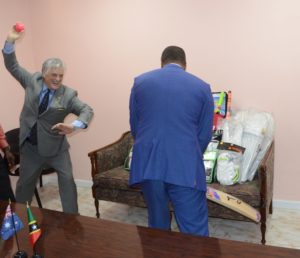 Basseterre, St. Kitts, October 06, 2017 (SKNIS): Several pieces of cricket gear were donated to the Government of St. Kitts and Nevis by the Government of Australia as a way of promoting family togetherness and to further encourage women and children to love the sport.

Minister of Foreign Affairs, the Honourable Mark Brantley, accepted the donation that was handed over by His Excellency John Pilbeam, Australia’s High Commissioner to St. Kitts and Nevis. He expressed thanks to the Government and people of Australia and said that the cricket gear will be put to good use.

“We are extremely grateful to Australia and to you Your Excellency for championing this donation of cricket gear. I believe the use of these cricket gear can only redound to enriching the skill level and experience of individuals in all teams and groups who will use them,” said Minister Brantley. “St. Kitts and Nevis stands in full support of your government’s conviction that sports diplomacy remains an excellent avenue through which important cultural and other bonds can be forged and strengthened.”

The foreign minister hailed High Commissioner Pilbeam’s visit as a testament to the strong efforts of the Australian Government to stand in solidarity with St. Kitts and Nevis and other neighbouring islands after being destroyed by two devastating hurricanes in September.

“We have all been damaged and right here in St. Kitts and Nevis our damages have been assessed at over 140 million dollars. So your presence here for us is very important, and I think for our public this is very important because it evidences Australia’s deep commitment to us in the region. And for a large country like Australia to ensure that it is here for a small country like us, I think that signals it is very important,” said the foreign minister.  “You being here is also relevant for us because it does reconfirm your own government’s belief that cultural gaps can be bridged by drawing people of all ages and genders together and in our case we are here with a lot of gear, in what is an Australian past time and what is also a West Indian past time and also a Kittitian and Nevisian past time – of course our national sport the game of cricket.”

His Excellency Pilbeam said that he views the cricket gear as more than just a donation and hopes that they will promote family togetherness especially among women and youth.

“What I want to do is have some sort of continuing impact on the development of cricket in St. Kitts and Nevis,” said the High Commissioner. “Perhaps what we could do is focus on women’s cricket and on youth cricket… what I had in mind was that perhaps people would use all this for training, and then maybe once a year St. Kitts teams could play Nevis teams – women’s and youth teams. We could call it family day or something like that.”

Minister Brantley shared similar sentiments and said that it is hoped that these gear can be used to foster some great contest, competitions and some family type events between St. Kitts and Nevis. High Commissioner Pilbeam said he is looking forward to this being rolled out and noted that he will definitely be back to St. Kitts and Nevis once it is implemented.