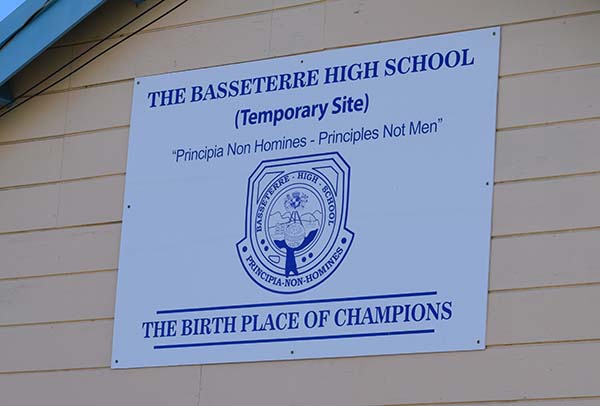 Basseterre, St. Kitts – The ideas for the new Basseterre High School facility put forward by the government will see the construction of a state-of-the-art and modern facility to educate almost 1,000 future students.

Minister of Education Shawn Richards said at a press conference last week that the government has estimated a cost of approximately $40million for the new school.

“After the concepts and designs have been submitted, that cost maybe adjusted upwards or downwards,” he said. “The costing does include the various experts and everything associated with the project. It is a capital project and, with capital projects, you include all of the necessary costing, not just the cost of construction, but whatever else you would determine, there is expense for associated with the project.”

Richards added that a committee of experts had been charged with the responsibility of identifying what the school would be comprised of. They are obviously looking into how much space they will need for sporting events, sports facilities, prefab classrooms, an assembly hall, a cafeteria, etc. so it’s a long process.

“As the minister of education. Yes, I am involved in what we would want to see as the end product for the new Basseterre High School,” he said. “There was a committee put in place to come up with the terms of reference. The terms of reference says to the contractor and designer, this is what we expect at the end of the day. These are the number of classrooms we’re looking for and these are the number of spaces we are looking for.”

“[We need] six rooms for computer labs that can be partitioned with 20 PCs each. [We need] five rooms [for] Learning Support and an additional resource centre, an audio visual room, auditorium with 1,500 seating capacity and a theatre arts classroom with a backstage. [We need] two rooms for lockers for each student, two rooms for gym equipment and exercise areas and classroom teaching space, gazebos and one projector per department and [a] mounting projector in the roof of each classroom. Again, we say, if we’re building a school, it should be start-of-the-art and technologically equipped.”

Richards further noted that other than those areas mentioned for teaching, there are some other areas that have been identified, including an “administrative area for principal and deputy principal and administrative assistant, a reception area, a records room and a supply room. With [an] increased student population and staff, it may require full-time vice principals, year heads and guidance counsellors [who] must also be provided for.”

Richards, however, indicated that some of the items proposed may not be included in the actual design, due to budget restrictions.

“Ideally, that is what we would like to see, at the end of the day, [but] the cost will be looked at and, depending on what costs we are seeing, then a determination may be made to scale down in certain areas,” he said. “For example, I mentioned a swimming pool; that may not be necessary at this particular point in time, and there are other costs [that] will come with a swimming pool. So even though it’s included here when we look at the cost at the end of the day and we have said to the designers and to the contractors that we expect to see an itemized cost is, when you begin to say well, add in, take out, at least you have a very good idea as to what you expect the final cost to be.”

Construction of the school could begin as early as later this year and could take up to two years to complete.