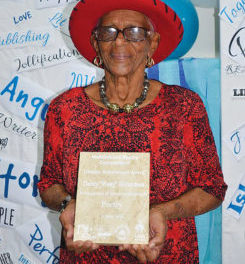 ANGUILLA–The Executive Council has announced a National Funeral for the late Daisy “Wong” Richardson at St. Mary’s Anglican Church in The Valley, on April 14.

Richardson was awarded the Anguilla Badge of Honour and Queen’s Certificate for her contribution during the Anguilla Revolution. She is noted for her bravery in travelling secretly to St. Kitts along with her cousin Mena Bryan, toward the end of the Revolution in order to nominate an Anguillian for the Anguilla seat in the St. Kitts-Nevis-Anguilla State elections. She was also one of the leading women who demonstrated against statehood and one of the leading female voices for separation from St. Kitts.

Daisy Wong, as she is known, was born in 1921 at Junks Hole Estate and lived at the family home in The Quarter. She documented the diversities of life in Anguilla through poetry and is well known as the author of “Li’l Bit A Guinea Corn Porridge” published in 1997 to commemorate 30 years since the Revolution. In 2016 at the Malliouhana Poetry Competition she was awarded a plaque for her involvement in the literary and cultural development of the island.

All Government flags are to be flown at half-mast on Friday, April 13, and Saturday, April 14, as a mark of respect for her.

The late Mrs. Daisy (Wong) Richardson will be remembered as having been one of the most vocal and celebrated women of Anguilla in the political, social and cultural life of the island.

She was an influential voice during the Anguilla Revolution which eventually led to the formal separation of Anguilla from the former British Associated State of St. Kitts-Nevis-Anguilla. She was awarded the Anguilla Badge of Honour and Queen Certificate for her outstanding contribution to the Revolution and to the self-determination and freedom of the people of the island.

Over the years, she emerged as a popular poet and storyteller, thus preserving, in her own style, the oral and cultural traditions of Anguilla. In 2016, she was given special recognition at the Malliouhana Poetry Competition Award Ceremony. She is the author of a collection of poems entitled A Li’l Bit of Guinea Corn Porridge with titles ranging from the Anguilla Revolution to politics, religion, sports and social and cultural life.

Daisy Wong, described as a heroine, multi-talented and phenomenonal woman, died at the age of 97 on March 8, 2018, in the United States where she had been staying for some time. It is perhaps noteworthy that she passed away on International Women’s Day when she may have otherwise been celebrated in Anguilla, or use the occasion to perform some of her literary works. She was born at Junks Hole Estate, on the eastern coast of Anguilla, in 1921 but resided at her family’s home in The Quarter for many years.

She possessed varied culinary skills including two of her candy products – the white and red-striped twisted ‘cockeeniers’ and the flat or square peppermints.

A dedicated church woman, in the Anglican community, Daisy Wong was the matriarch of a close-knit family to whom The Anguillian offers its condolences.

It is expected that this outstanding and beloved notable Anguillian will be accorded a National Funeral by the Government of Anguilla for her patriotic role in the Anguilla Revolution.