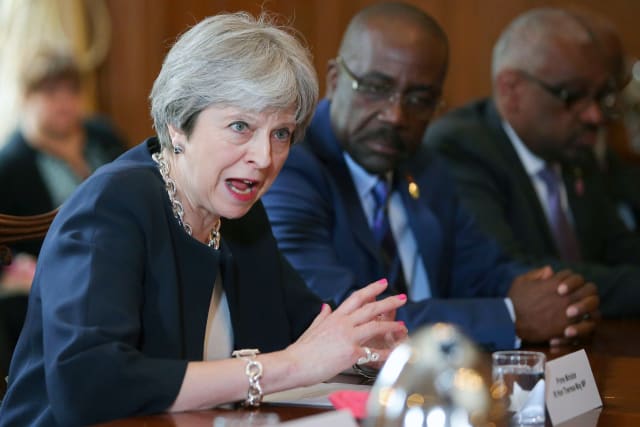 Theresa May is “best placed” to sort out the fiasco over the status of so-called “Windrush generation” migrants because she implemented the rules which caused the problems, a Caribbean minster said.

St Kitts and Nevis foreign minister Mark Brantley said the policies which led to the row had been “misguided” or had “unintended consequences”.

He also warned that the way the Government handled the situation could have implications after Brexit as the UK faces having to deal with the status of millions of EU citizens.

Mr Brantley, who was in Downing Street on Tuesday as the Prime Minister apologised to Caribbean leaders, said the problems had been caused by “misplaced and perhaps misguided policy” or the “unintended consequences of this policy”.

“I felt that your Prime Minister here, Theresa May, is perhaps best placed to deal with this fiasco because clearly she was Home Secretary when many of the rules went into effect that now are having these disastrous consequences for so many people,” he told BBC2’s Newsnight.

In a sign that politicians in Brussels were watching the unfolding row, the European Parliament’s Brexit co-ordinator Guy Verhofstadt told the Telegraph: “This could be worrying for millions of EU citizens in the UK who may fear that they could face similar treatment after Brexit.

“The Home Office has agreed to come to the European Parliament to explain their proposed registration system for EU nationals and I expect MEPs will rightly want safeguards.”

The Prime Minister apologised on Tuesday for the treatment of members of the Windrush generation who have been threatened with deportation after decades living in the UK.

Following a tightening of the immigration rules under Mrs May as Home Secretary, some people who came to the UK in the decades following the Second World War – often as schoolchildren – have faced removal unless they can prove they are entitled to stay.

Meanwhile, officials defended the destruction of thousands of documents recording the arrival of Windrush-era migrants.

Downing Street said disposing of documents had been the right decision to take while the Home Office said the information had limited use and keeping them could have broken data protection laws.

But Labour said the destruction of the registration slips was “truly shocking” and blamed the “fiasco” on the Home Office.

In 2010 a decision was taken by the UK Border Agency to dispose of the registration slips, in line with the principles of the Data Protection Act which is aimed at ensuring that personal information is not held for longer than necessary.

A Home Office spokesman said: “Registration slips provided details of an individual’s date of entry, they did not provide any reliable evidence relating to ongoing residence in the UK or their immigration status.

“So it would be misleading and inaccurate to suggest that registration slips would therefore have a bearing on immigration cases whereby Commonwealth citizens are proving residency in the UK.”

The Prime Minister’s official spokesman said: “The decision was taken to securely dispose of these documents, and that was the right one to take.”

Asked if Mrs May had been aware of the disposal while she was home secretary, the PM’s spokesman said: “My belief, at this moment, is that it was an operational decision that was taken by the Border Agency.”

A former Home Office employee told the Guardian it was decided in 2010 to destroy the disembarkation cards, which dated back to the 1950s and 1960s, when the Home Office’s Whitgift Centre in Croydon was closed and the staff were moved to another site.

The Home Office stressed that in deciding immigration cases, officials consider alternative evidence, such as tax records, utility bills and tenancy agreements, as evidence of ongoing residency in the UK in exceptional circumstances.

But shadow home secretary Diane Abbott said: “The Windrush generation have been threatened with deportation because they cannot provide documents, but now we learn that the Home Office destroyed the very records that could have demonstrated their right to remain.”