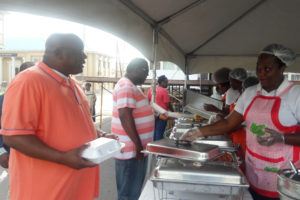 BASSETERRE, ST. KITTS, August 6, 2017 (PLP PR Media Inc.) — The National Political Leader of the Peoples Labour Party (PLP) Dr the Hon Timothy Harris has said that the massive show of support for the benefit breakfast put on by the party’s Women’s Arm on Saturday August 5 at the Shoreline Plaza in Basseterre underscored the commitment the country has to its school-going children.

“When members of the PLP Women’s Arm arranged to host this fundraising breakfast, their intention was to raise funds to assist children returning to school in the academic year 2017/2018 to get school supplies,” said Dr Harris who is also the Prime Minister of the Federation of St. Kitts and Nevis. 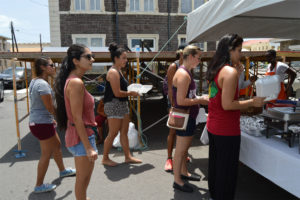 “Citizens and residents alike turned up in large numbers because they know the value of education, and expect the children of this Federation to receive quality education. I was pleased to see a group of Ross University students who came to support this effort because they would wish to see those in our primary and high schools get to the level they are at.” 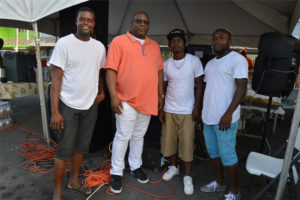 He commended the Women’s Arm of the Peoples Labour Party for the advocacy role they are playing in solidarity with the Federation’s children saying that the fundraising breakfast on Saturday August 5, which was dubbed ‘Power of Women Breakfast’, was the second such event organised by the women of PLP.

The first one was organised by members of the Peoples Labour Party (PLP) Branch #7 Women Empowerment Group who held their fundraising breakfast on Saturday June 3 outside Bourryeau Gate in Constituency Number Seven to assist parents with children who were graduating from the four primary schools in the constituency.

The two representatives of the PLP Women’s Arm, Ms Tishanna Norford and Mrs Sonia Henry, said they were overwhelmed by the support their received from the constituency branches of the Peoples Labour Party.

“We worked as a team to ensure that the breakfast was a success, but the great contribution of food from the different branches of the party was truly a work of love,” said Ms Tishanna Norford. “They worked overnight to ensure that the food was ready when the breakfast started at6:00 this morning. It was a real demonstration of team spirit at its best and which will help us in our efforts to ensure that no child will miss school supplies this coming academic year.”

Among the first to take not one but four Styrofoam boxes of breakfast for his family members was Mr Vince Matthew from Constituency Number Seven. He said that the breakfast was quite nutritious and with large servings that also included a selection of fruits. He affirmed: “This is a healthy breakfast.”

People from all walks of life and from the different constituencies in St. Kitts came to support the philanthropic cause that was spearheaded by the Women’s Arm of the Peoples Labour Party. There was also goat water on offer and those who came in the late morning enjoyed it.

The event ended at 12:00 noon, and the PLP’s Deputy National Chairman Mr Craig Tuckett was there throughout the entire period to ensure that all went on smoothly. He said that he was impressed by the orderly manner the event was held and thanked the Selector Nails Music System who played gospel music that appealed to those attending the event.

“From the overall support that we received today in our efforts to raise funds to assist children get school supplies, it is without doubt that the Peoples Labour Party is becoming a formidable force in the Federation’s political arena,” said Mr Tuckett.