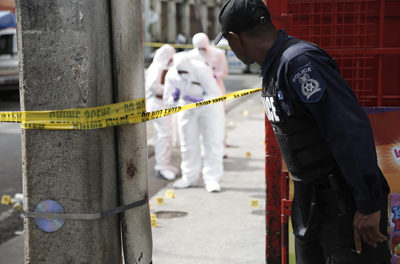 Although the murder toll for 2019 is lower than last year’s figure, Criminologist Darius Figuera is concerned as he has noticed several alarming trends, including ‘mass shootings’.

The comparative for the same period was 302.

And while this represents an estimated six percent decrease in homicides, this figure does not impress the criminologist.

“As it stands right now, we are still looking at a murder toll which would be in the 500 category,” Figuera said.

Statistically, there have been 281 murders over 196 days, which gives a daily average of 1.44 homicides.

If this rate continues unabated, by the end of 2019 there can over 520 murders.

At the close of 2018, there were 516 recorded murders – the second highest annual total in this country’s history.

Figuera told The Express that while he did not expect the figure to cross 2018’s figure, he expected it to be close.

“The current figure is note worthy. Yes there was a low and quiet first quarter, no one is denying that. But during the second quarter the toll exploded, and it would be remiss to pretend otherwise. The percentage difference between this year and last year is in the one digit range. And if the toll is not addressed it will most certainly cross 500 once again this year,” Figuera said.

The criminologist noted that he had seen recent trends over the past year, which appear to be contributing to the high toll.

“We are seeing more and more reports of multiple killings in a single attack. It appears that criminals are simply shooting at crowds where their targets have gathered instead of focusing on their targets. It is a concerning phenomena and what it says to me is organized and systemic violence are on the rise,” Figuera explained.Get caught up with news from the news leader

He submitted that if he had to theorize why, he would attribute blame to an increase in ‘ganja wars’.

This increase in violence, Figuera theorized, also coincided with the migration of Venezuelan nationals to this country.

“Let me be very clear, the issue is not with migrants or migration. But history has shown us that large migration shifts are an excellent cover for criminal activity. And if you are looking at the figures, this increase in migration also coincides with the violence, and furthermore a dramatic change in the ganja market. Marijuana which was only accessible from Columbia is now making its way into Trinidad a bit more easily, and they are going at rates of anywhere between $300 and $600 an ounce. So there is clearly a demand here, and persons are taking advantage of this demand and supplying at high costs. And these are just the facts as they stand,” Figuera stated.

He said that since 2013, his observations were that these ‘ganja wars’ were the single greatest contributor to violence in this country.

And while there was no one answer he could give which could fix the problem of increased violence, he believed the closest recommendation he could give would be for the Government to decriminalize marijuana.

“The government has already indicated they are moving to decriminalize small portions of marijuana. This is a good step. But if I had to make a recommendation, it would be to decriminalize it totally. Supply needs to outstrip demand, as this is the model which would most likely lead to a decrease in violence. It should end this war, or put serious spokes in it. Because the price that this country continues to pay for the illegality of this substance, is blood,” Figuera said.