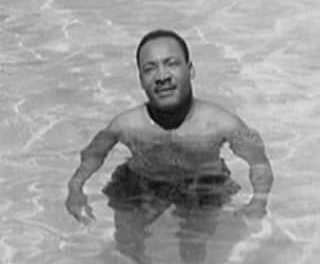 (January 14, 2021)WROTE MANY OF HIS FAMOUS SPEECHES IN BIMINI IN THE BAHAMAS
(Would have turned 92 today. Jan. 20, 2021 is MLK Jr. DAY in the US).
• King visited Bimini on many occasions because it is where Adam Clayton Powell Jr., politician and civil rights reformer, lived. King considered Powell, the most influential black man in the world, a Kingmaker who could help him and his work get international attention.
• While King spent much of his time on the island relaxing, writing and socializing with Powell, he did have certain traditions every time he visited – namely a lunch of conch fritters and ginger ale, a combination most locals hadn’t seen before.
• Ansil Saunders, a boat builder, became King’s guide and friend, taking the reverend out to secluded parts of the island, where he could be alone with his thoughts.
• It was on one of those days that Sanders and King spent out on a boat in the red mangroves, that King wrote notes for his Nobel Peace Prize acceptance speech in Oslo, Norway in 1964.
• King was killed on April 4, 1968, one week after returning from Bimini, where he wrote his famous speech to the sanitation workers on strike in Memphis, often called the “I’ve been to the mountaintop speech” for its legendary refrain.
• When King died the people of Bimini had a service to remember him. Now there are 2 busts of King on the island – one in front of the Straw Market in the center of Alice Town. and one among the very mangroves where King spent so many peaceful afternoons. Both depict King inside a seashell, an homage to the island and a way of keeping him safe.
• The small Bimini Museum across the street from the Straw Market has photographs and memorabilia from King’s visits to the island. There is also a plaque honouring King at the airport.
• Inspired by King’s civil rights activism in the US, black Bahamians pushed back against the rule of the Bay Street Boys, a group of wealthy whites who controlled the government through illegal gerrymandering despite being a small minority of the population, eventually causing the party to dissolve in the early 1970’s.
• King’s legend endures on Bimini as a civil rights hero and as a guy everybody could say hi to on the street.
Source: CNN Travel. ‘The Bahamian island where MLK wrote his speeches’.