Cap: Tyasha Henry (third from left in front row) and participants from CARICOM countries at the training course in Japan.
Tweet 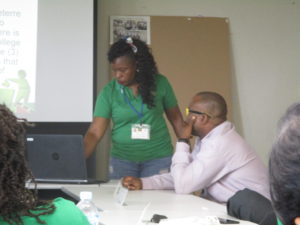 Tyasha Henry delivering a presentation during the training course in Japan.

Litter warden with the Solid Waste Management Corporation Tyasha Henry, is hoping to adopt a class at one of the high schools in St. Kitts to teach them proper waste disposal practices. Henry has just returned from a six weeks training course in Japan, where she acquired certain skills and knowledge which she believes is pertinent to waste disposal practices in St. Kitts. She believes such knowledge is worth sharing with the some of the students she is hoping to mentor. “Upon leaving the training, they gave us an action plan. Action plan is something they want us to do when we go back home, that we want to see done,” she said. Her action plan was separating garbage in categories, namely paper and plastic.
Henry’s project was inspired by her assignment from the course to adopt a project using the information she would have garnered from the training. “I realize in Japan, they use the school children to carry out most of their (initiatives)….I decided to then adopt a school. Within that school maybe I could have a class to me and then I would teach them about how to better manage their garbage within the school. Maybe we can have litter warden within the school and then maybe we can move on to different schools. The litter warden is of the view that the student would adopt these waste disposal practices when they return home. 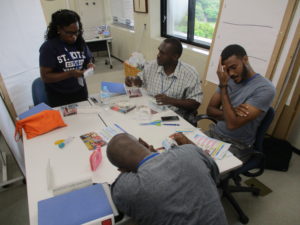 Henry is one of several SWMC employees over the years, who have been afforded the opportunity to travel to Japan on this course. The course is known as the Advanced Techniques in Solid Waste Management and is under the auspices of the Japan International Cooperation Agency (JICA). She is the first litter warden to attend the course from the SWMC and while the information may not directly relate to her field of work (since most of the information pertains to work on landfills), she still found value in the course.
She pointed to some of the things she learnt on the course, which prior to that time was unknown to her. These included learning about leachate and coordinating specific days for picking up certain types of garbage. Leachate is water that has percolated through solid waste on some of the disposed contents.
Regarding coordinating garbage pickup days, Henry took note of a particular procedure in Japan, which she thinks is a good idea. “If today is a day where we are supposed to have out plastics and I decided to put out maybe an old umbrella, the guys on the truck would have a book and they would (make a note) because they would not collect it. If they continually come and realize that the umbrella is still there, they would go to the persons and let them know that if they leave (the umbrella) out there, they would be charged for it,” she explained.
Visiting Japan was also a great experience for Henry as she was immersed in a new culture and environment. “Beautiful. That was the first thing that came to my mind (when I arrived in Japan), Henry said. “I had an opportunity to meet people from places I never heard about. Learning different languages, it was exciting. To me everything about this trip and about everybody was exciting,” she exclaimed.
She described how she felt when she first learnt about the opportunity to travel to Japan. “I was excited because I really wanted to go and I really wanted to learn different things about Solid Waste and figured this was my opportunity to learn more.”