LIBA and SKNABA MVP Nashorn “Big Nash” Maynard has made his debut with the Illinois Coal Miners in the Central Basketball Association CBA in the US.

Just a few months after his dominating MVP performance at the recent LIBA Leeward Islands Basketball Association Tournament in Anguilla Maynard was quickly pursued by  Coach John Spezia of the Illinois Miners. Spezia is no stranger to St.Kitts-Nevis as he has been responsible for a number of SKNABA players being able to gain Basketball scholarships at various NCAA and NJCAA teams. 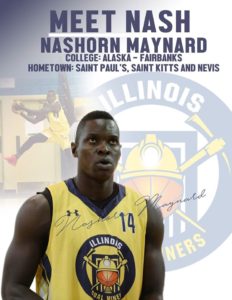 Nash was able to get his first start with the Miners on April 23, 2017 that resulted in a massive win over the defending champions of the CBA, in which Nash recorded a double-double, 10 points and 11 rebounds. “It’s all about hard work, and getting back on defense”, said Nash, being known among his teammates as a ‘workhorse’.

Coach Spezia has described  Nash as  “A great rebounder, hard worker and good defender. He’s one of those guys that has good timing and finds himself in position for rebounds and putbacks”. “Nash came in and fit with the team just like family, with 1 goal, 1 mission.. Play together,” C oach Spezia continued.

Coach Spezia recently visited St.Kitts-Nevis on one of his usual visits and met with the local Basketball executive to discuss how he can become more involved with the overall development of basketball in the federation. 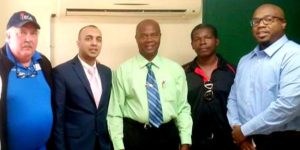 “We had a very fruitful discussion with Coach Spezia along with the Director of Sports Mr Wiltshire and the owner of the CBA about the possibility of basketball development assistance as well as the identification and development of players for both college scholarship as well as semi pro and pro basketball opportunities,” said Wallis Wilkin General Secretary of the SKNABA.

“We are extremely proud of Nash Maynard. He is an exceptionally gifted and talented and hardworking individual and player ,” Wilkin continued

Nash Captained the recently victorious St.Kitts National Team at the Annual Leeward Island Basketball Association Championship held in Anguilla. Nash along with Coach Glen “Ghost” Phillip led the team to a very dominating tournament winning each game by double digits with Nash leading the tournament in all but 1 Category.

The 8-week CBA season, which commenced its 5th year in 2017, begins annually at the end of March and concludes at the end of May. Following the season, the league works diligently behind the scenes to help its players earn opportunities to try out and secure contracts with international organizations across the globe.