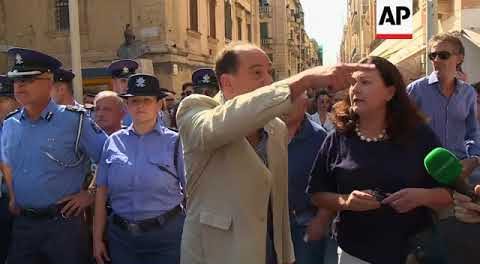 VALLETTA (Reuters) – Thousands of Maltese called for justice on Sunday in a protest held by a group of non-governmental organizations after a journalist was killed last Monday.
The demonstrations in Malta’s capital, Valletta, were organized by the group Civil Society Network after the car bombing that killed anti-corruption blogger Daphne Caruana Galizia, 53, in a murder that shocked the Mediterranean island.
Some of those present at the protest carried placards or wore T-shirts with the last words written by Caruana Galizia, minutes before she was killed: “There are crooks everywhere you look now. The situation is desperate.”
“You remember, we gathered, almost three years ago, in Paris, after the Charlie Hebdo killing. We have gathered today in Valletta for Daphne and everybody can say ‘I am Daphne, je suis Daphne’,” Christophe Deloire, secretary-general of Reporters without Frontiers, told the crowd.

Michael Briguglio, who heads the Civil Society Network, said the commissioner of police and the attorney general should be removed for not having acted following revelations in the so-called “Panama Papers”.
Caruana Galizia reported in April that the wife of Maltese Prime Minister Joseph Muscat was the beneficiary of a secret company in Panama, called Egrant, in which $1 million had been deposited from Azerbaijan. The claim was strenuously denied by the prime minister and by his wife.
A magisterial inquiry on the Egrant charges is still under way.
The Maltese government on Saturday announced a one million- euro reward and protection for anyone who comes forward with information leading to the identification of whoever was behind the journalist’s murder.
“This is a case of extraordinary importance which requires extraordinary measures,” the government said in a statement on the reward.

Muscat, re-elected with a large majority for a second five-year term in June, did not attend the protest on Sunday, saying it would have been “inappropriate”.  A delegation from his Labour Party and the Opposition Nationalist Party attended.
President Marie-Louise Coleiro Preca attended, walking at the back of the large crowd with her husband. She was later due to meet a delegation of the Civil Society Network.
Flowers were laid at the foot of the Malta Great Siege monument – commemorating the unsuccessful siege of Malta by Ottoman Turks in 1565 –  which has become a temporary shrine for Caruana Galizia.
“It is us who are now under siege,” a participant said as he looked at the banks of flowers under a picture of Caruana Galizia.
(Reporting by Chris Scicluna, editing by Larry King)
Copyright 2017 Thomson Reuters.